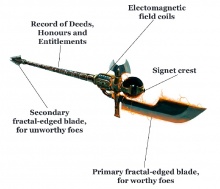 A Warscythe is a type of Necron weapon composed of living metal and similar to the Phase Blades used by the Imperium.[1a]

Warscythes are used by high-ranking Necrons, including Overlords, Lords and Lychguards. It is of a similar design to the Staff of Light, although it has no ranged attack and is more formidable in combat. They are made of the same living metal as their ships and bodies and can carry itself effortlessly through all types of armour, including heavy energy fields, thanks due to its own entropic field generator.[2] A well directed attack can take off the end of a Leman Russ Battle Tank or scythe open the side of a bunker.[1a] A Warscythe's power core blazes with the heraldic color of its wielder's Dynasty.[2]

A curious side effect of the warscythe’s power field is to render the weapon almost impossible to destroy. There are several well-documented instances of warscythes surviving direct hits from lascannons, and even from turbo-lasers, with little harm to show for it. Unfortunately, this protection does not extend to the wielder, and it is quite common for a warscythe to survive a battle where its master does not.[2]