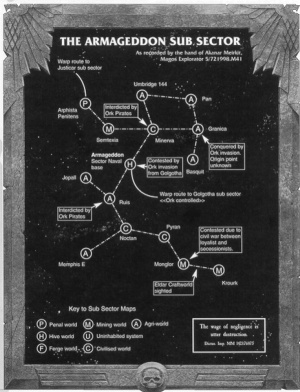 It was the site of heavy fighting during the second and third wars for the world of Armageddon.[1] There are many prophets that claim that the Imperium is dying spread throughout the galaxy and a large number can be found in this region due to the wars that have ravaged it. Despite this, however, some view the subsector as a prosperous and productive region.[2]

The Armageddon Subsector borders the Justicar and Golgotha Subsectors.[1]