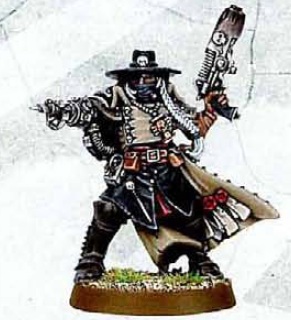 Gideon Lorr is an Inquisitor of the Ordo Hereticus.[1]

Lorr is frequently seen patrolling the pilgrim routes of Segmentum Pacificus to hunt down marauders. Yet at the same time, Lorr remains a mystery to Segmentum authorities as he frequently acts quite apart from the rest of the Inquisition. Described as a Monodominant, Lorr is a strict and fanatical Puritan.[1]

Lorr's fanaticism was best displayed while en route to the Shrine World of Jabin Terminus aboard a Merchant Fleet vessel Achen V. The vessel became becalmed in the Immaterium, an event not unheard of during Warp travel but dangerous nonetheless. The situation grew worse when the ship's Navigator fell victim to Daemons and vile creatures began to emerge from his body. Lorr confronted the struggling Navigator, putting a plasma round through his skull before any Daemon could fully emerge. But ever since this event, Lorr has displayed an uncompromising intolerance for any form of psychic ability. He sees Psykers as tainted by the Warp and will mercilessly put them down wherever he can find them. This policy has, on many occasions, put Lorr in conflict with a number of Imperial institutions. To date, Lorr has executed in excess of a hundred Astropaths. He is also rumored to have put down a good number of Navigators, which would provoke a confrontation with the powerful Navis Nobilite. But despite these controversies, for the time being Gideon Lorr is considered a valuable asset to the Inquisition, as he is relentless in his pursuit of foes of the Emperor.[1]