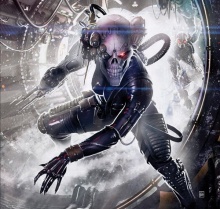 Iota was a Protiphage of Clade Culexus at the time of the Horus Heresy. Created in a laboratory through secretive means to copy the Pariah gene, Iota spent her entire life as a specialize Psyker killer.[1a] Despite this she was not a mere murderer, remembering the name of every one of her victims and remaining non-violent under normal circumstances.[1b] Iota was the Culexus assassin chosen to take part in the Execution Force to assassinate Horus on Dagonet, where she remained indifferent and aloof to the plight of the locals and was known to vanish for days at a time in the prelude to the operation. She would show great interest in Venenum Assassin Jenniker Solam in her quest to help the local population in its civil war against traitor forces, and followed her instead of taking part in the assassination attempt against Horus.[1c] With Solam, Iota instead encountered the Daemon Pariah hybrid known as Spear, whose presence she was able to detect. Using her Animus speculum to viciously damage Spear, Iota had the upper hand in the battle until a drop of her blood was spilt, which allowed Spear to engage his "genetic lock" and destroy her completely.[1c]