A Jump Pack is a back mounted device containing turbines or jets powerful enough to lift even a user in Power Armour.

A jump pack greatly enhances a warrior's mobility by allowing him to travel quickly across the battlefield, making great bounding leaps over obstructions and launching him into the melee of close combat. Its roaring engines cam also slow the wearer's descent when leaping from low-flying aircraft, allowing him to Deep Strike with relative safety directly into the fray.[1]

Some models of jump pack feature inbuilt grenade launchers that can clear out the space that the user will land in.[6] 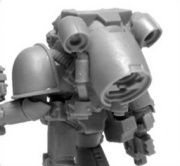