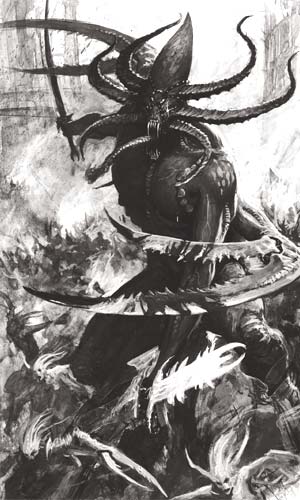 Amnaich the Golden was an unusually powerful Keeper of Secrets.[1]

Amnaich was among the Greater Daemons summoned into Realspace by the Thousand Sons, during the Battle for Terra[2a]. After the Lion's Gate Spaceport fell to the Traitors, the Daemons were unleashed to destroy the Imperial Palace's Colossi Gate[2b]. While they succeeded in tearing down the Gate's outer defenses, the Daemons were destroyed by the White Scars' Stormseers and the Adeptus Custodes, before they could complete their task.[2c]

Conversion of the Golwyn Belt

Amnaich was worshiped as a god amongst the human inhabitants of every planet populating the unexplored Golwyn Belt in the later centuries of M39, who turned from their fertility deities to become members of his unshakable faith. To reinforce his followers' faith, Amnaich manifested himself amongst them once every generation. His voice was described as "rolling thunder in a drought", and his seemingly benevolent gaze like the "first rays of sun after an eternity of night". Such was the strength of his charisma and the favour that he held with Slaanesh, even Amnaich's daemonic host was perceived as shining angels by the deluded population. Ironically, however, the message that his missionaries preached to each and every civilisation they encountered was one of harmony and tolerance.[1]

As M39 drew to a close, Amnaich put into motion his ultimate plan: to orchestrate a mass suicide ritual of such magnitude that it would both truly turn him into a god and pull the entire Golwyn Belt into a Warp rift (Amnaich's "promised land"), where no outside influence could reach him. This in effect would allow Amnaich to feed upon the billions of souls trapped there for millennia without fear of retribution from the Imperium.[1]

To this end, he ordered the construction of a vast golden colossus in his image at the heart of each city in the Golwyn Belt. Such was the scale and perfection of these statues that they were clearly visible from space, and it took entire bloodlines to complete each one. In the days before the millennial celebrations, Amnaich undertook a great ritual that allowed him to fragment his consciousness into countless parts and instill a piece of himself into each of the golden titans. On the eve of the millennial celebrations, millions of Amnaich's faithful gathered around the feet of each statue, chanting Amnaich's name in unison and debasing themselves as they prepared to sacrifice themselves to his glory. The mechanism was simple: their departing souls would flow into each statue and grant Amnaich existence within hundreds of these nigh-indestructible forms.[1]

Despite the remote location of the Golwyn Belts, Amnaich's burgeoning presence in the Warp was felt by Imperial astropaths, which led to an investigation by the most talented psykers in the Inquisition. The sheer magnitude of Amnaich's threat was realised, and the Imperium dispatched a battlefleet of unprecedented size toward the system to contain it.[1]

The fleet arrived during the climax of Amnaich's ritual, and his consciousness had already filtered into each of the golden colossi. The Imperial Navy wasted no time, and immediately positioned a ship above each and every single statue. At a signal from Fleet Command, each of the ships launched a lance strike upon the exact location of the golden colossi, obliterating both Amnaich and all his disciples for all eternity.[1]

At the dawn of M40, the Ecclesiarchy was then dispatched en masse to convert the confused and frightened populations to the Imperial Faith. Only those who did not succumb to Amnaich's epic religious conversion of the Golwyn Belt were allowed to live. Today, the elite Imperial Guard Regiments of the Golwyn Strike Corps number well over two hundred, and their planetary tithes regularly exceed even the most stringent demands of the Administratum.[1]