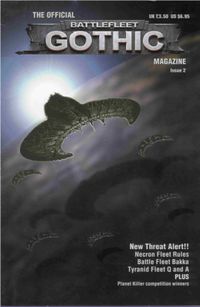 To include this disclaimer in corresponding articles include the following wiki-code: {{Fanatic}} which will auto-create the disclaimer displayed above.
Retrieved from "https://wh40k.lexicanum.com/mediawiki/index.php?title=Battlefleet_Gothic_Magazine&oldid=438937"
Categories: