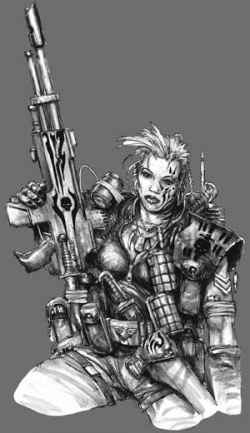 A Sergeant of the Mordant 303rd Regiment.

Mordant is a mining world where the population lives in the subterranean tunnels. The conditions within the tunnels are harsh, where criminal gangs are the only authority and citizens must prey upon each other for the meagre resources. Only the skilled miners, part of a very old organization of clans, do not suffer from the poverty of the world. The miners contract local manual labor, paying just enough to allow the most basic of living conditions in the shacks of the shanty caverns.[Needs Citation]

The Mordant regiments are generally formed from those that cannot live on the miserable payment of the mining clans or who earn the wrath of one of the criminal gangs.[Needs Citation]

Regiments of Mordant make excellent tunnel fighters and are typically deployed to combat zones in which their natural affinity with dark and confined spaces can be used as an advantage. Mordant regiments are often destined for nocturnal worlds.[Needs Citation]

Mordant regiments have little in the way of a standardized appearance, as much of their personal equipment is acquired from previous war zones. As with Imperial Guard regiments in general, their equipment is marked with symbols from the culture of their home world.[Needs Citation]

Mordant soldiers will often be armed with weapons not issued to them during their regiment's founding, such as the Triplex-type lasgun, a rare model in the regions the Mordant regiments have fought, but highly valued by soldiers who must fight in underground tunnels. A veteran of many campaigns will often have acquired a range of specialized and uncommon weapons and equipment, either from past war zones or stolen from soldiers of other regiments.[Needs Citation]