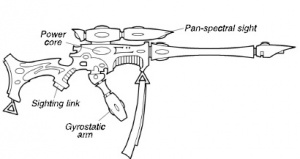 The Ranger Long Rifle is an Eldar long-barreled Sniper Rifle favoured by Rangers and Pathfinders. While equivalent in function to the Imperial Long-Las, the long rifle is custom-grown to take advantage of the superior abilities of the Eldar, and its psychically-grown firing crystals maintain a tighter beam over longer distances.[1] Its highly sophisticated sights allows the sniper to locate weak points in an enemy's armour and exploit them to devastating effect.[2][3]