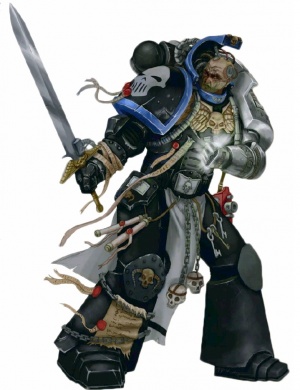 Rennin Tri'el is a Prognosticator of the Deathwatch, originally from the Silver Skulls Chapter.[1]

Amongst the various members of the Dead Cabal, Prognosticator Rennin Tri'el stands out as the foremost authority on the Eldar. His knowledge is unmatched by anyone else in the Jericho Reach and he has dedicated his life to understanding and defeating this ancient menace.[1]

Rennin Tri'el is an accomplished Librarian — or Prognosticator, as they are called among his brothers of the Silver Skulls Chapter. He has been a member of the Deathwatch for nearly a century and a member of the Dead Cabal for more than half that time. When he was called upon to serve the Deathwatch, Rennin proudly joined the august organisation to better serve the Emperor. Before coming to the Deathwatch, Prognosticator Tri’el served with the Silver Skulls Third Company on the Eastern Fringe of the Imperium. The Third Company was on a long-term campaign against the Tau throughout the Ultima Segmentum and this ongoing war had reached a stalemate.[1]

The Tau had retreated to their planetary strongholds while the Imperial forces reinforced their holdings in the region. During the lull in the fighting, three squads of Silver Skulls were dispatched to investigate a world designated as PX3354D. This dead world had been given a wide berth by the Tau forces, and the Imperium wished to know why. While on this planet, the Space Marines were beset by a large force of Eldar raiders.[1]

The battle was disastrous for the Silver Skulls as the vicious Eldar struck without warning and with savage fury. After losing nearly two-thirds of their forces, the Silver Skulls were finally able to fall back to their Thunderhawks and return to their strike cruiser. The raiders made no attempt to pursue the retreating Adeptus Astartes and the Space Marines returned to their staging area to regroup and honour their fallen brothers.[1]

After this encounter, Tri’el became obsessed with unlocking any and all knowledge about the Eldar. What did they want? What were their goals? Where did they come from? These questions would influence the Prognosticator’s next two decades as he returned to the Chapter Fortress and began an extensive investigation into the history of the depraved beings. It was then that he discovered the rift in Eldar society and of the depraved Eldar of Commorragh. It had been these latter Eldar who had decimated the men under his command on PX3354D.[1]

Rennin traveled across the breadth of the Imperium in his pursuit of knowledge, all while continuing to serve his Chapter on the battlefield whenever called. It was during this time that the Prognosticator drew the attention of the Deathwatch and the Dead Cabal. Inquisitor Ramaeus used her influence to have Tri'el called for service with the Deathwatch so that she could witness the Epistolary in his studies. For his part, Rennin gladly embraced the service with the Deathwatch as he knew this would provide him with access to even more knowledge of the xenos he sought to understand.[1]

Once he had joined the Deathwatch, Rennin found himself involved in a number of missions against a variety of xenos. He battled the Tyranid hordes that attempted to consume worlds of the Jericho Reach, fought Tau forces throughout the region, and waged continual war against the heretics of the Acheros Salient. When not involved in an active mission, Tri'el spent much of his time in the massive libraries of the Deathwatch using their vast gathered knowledge to continue his pursuit of the Dark Eldar, for while the debased creatures were not particularly active in the Jericho Reach, Tri'el had found evidence of webway activity in the Reach. After two decades of faithfully serving the Watch, he was approached by Watch Captain Mathias and asked to join him and his compatriots in the Dead Cabal. The Prognosticator graciously accepted their offer and a whole new avenue of information presented itself to him.[1]

Since that time many decades ago, Rennin Tri'el has established himself as the foremost authority on the Dark Eldar and his insights into their movements, battle tactics, and weaknesses have proved invaluable to the Deathwatch. He has continued to expand his already considerable knowledge and is an outspoken member of the Dead Cabal and their goals. Tri'el believes that the Dark Pattern is, as he describes it, a sort of precursor of the webway. He has yet to elaborate on this theory to his superiors in Deathwatch, but they put a great deal of faith into his theories and his Brothers in the Dead Cabal are anxious to learn more of what he believes this means.[1]

Rennin has specialized in using his psychic abilities to "read" a number of ancient artifacts and weapons in addition to the more traditional oracular powers at his disposal. Through the use of this psychometry, Rennin has divined a great deal of information relating to the use of the Eldar Spirit Stones and why such devices are so prized by them. He has also learned what little he can concerning the spiritual wasting that afflicts the Commorrite Eldar.[1]

The Prognosticator has recently uncovered information that has opened a brand new avenue in his studies on the Dark Eldar and their plans. He has kept his discovery secret, and so far only one other in the Dead Cabal knows of his findings — Watch Captain Mathias. The two of them are working closely on a mission deep into the worlds of the Dark Pattern to find out exactly what Rennin’s discovery portends for the future of the Jericho Reach.[1]