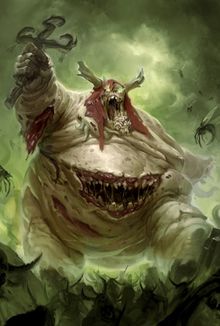 Rotigus Rainmaker, the Generous One, is a powerful Great Unclean One of Nurgle[1] He was second in Nurgle's favor until after the Plague Wars, when he was elevated over Ku'gath.[7c]

Rotigus causes repugnant plant life to spread about him in waves wherever he goes. Such is the strength of this power, that Rotigus feels no need to carry weapons and instead bears a Gnarlrod, covered in trophies and icons, which constantly rots and regenerates from a seed to bring forth ever-more foul diseases. He also manifests Nurgle's Deluge – a rotten, diseased storm that eternally hovers over his mountainous form and unleashes a vile downpour that spreads the blessing of Nurgle to every far corner of the battlefield[1]. Rotigus is also worshiped by mortals in the far corners of the universe as a generous, life-giving deity of prosperity and fecundity. However the gifts he gives are foul in nature, and any who pray for his patronage soon see the error of their ways[2].

During the Horus Heresy, Rotigus was among the Greater Daemons summoned into Realspace by the Thousand Sons, during the Battle for Terra[6a]. After the Lion's Gate Spaceport fell to the Traitors, the Daemons were unleashed to destroy the Imperial Palace's Colossi Gate[6b]. While they succeeded in tearing down the Gate's outer defenses, the Daemons were destroyed by the White Scars' Stormseers and the Adeptus Custodes, before they could complete their task.[6c]

Sometime later, the Greater Daemon was summoned by the Death Guard during the Siege of Nebbus, and the filth and madness he wrought ultimately claimed the world for Nurgle.[3] During his rampage across the Eastern Fringe, Rotigus infected many Maiden Worlds and thus incurred the wrath of the Harlequin Masque of the Frozen Stars. The Masque managed to perform a ritualistic dance that caused cleansing rains to purge the world of Rotigus' pestilence.[4] Rotigus later was summoned to Vigilus by Chaos Forces during the War of Beasts.[5]

During the Plague Wars Rotigus would inform Ku'gath that Nurgle himself had ordered his return to the Scourge Stars in order to wage the War in the Rift, and seemed delighted to hear that the most favored of the Plaguegod would refuse.[7a] The rainmaker would meanwhile weave his own plans in Ultramar, appearing in the Library of Ptolemy on Macragge to tempt Fabian Guelphrain into reading a tome which contained the history of Imperium Secundus. He engaged in a brief battle with Tigurius before withdrawing.[7b] Afterwards Rotigus appeared before the shattered remains of Ku'gath inside the Warp to gloat that his compatriot had earned the Plague God's ire, and that he was now highest in Nurgle's favor. Moreover, Rotigus was confident that his plan with Fabian would cause the Imperium to rot from within.[7c] 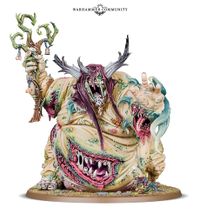