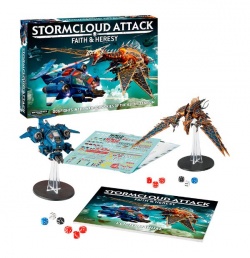 The sky shall be your grave.

The galaxy of the 41st millennium burns, trapped in an unending war, with every race set against every other, in all imaginable theatres of conflict. A vital component of these battles is the desperate struggle for aerial superiority: wings of aircraft engaging in spectacular dogfights, weaving through storms of bullet hell, swooping into valleys to shake off enemies before unleashing incredible firepower, climbing at stunning speed to gain the perfect angle for a volley of missiles... the skies darken with fleets of combat aircraft vying for superiority, with the unfortunate second-best falling from the sky in spiralling pieces.

There are several editions of the game, each with two different flyer models to oppose one another:

Every edition also includes an eighty-page softback flight manual detailing the awesome rules for dogfighting manoeuvres, with a selection of missions - duels, dogfights, and even campaigns. There’s even an exclusive transfer sheet with ace decals and more included.