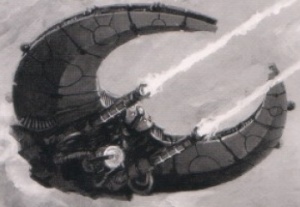 Night Scythes are the favored tool of Necron aerial forces. Maneuverable enough to avoid fire and fast enough to outpace surprised defenders, these interplanetary scout and transport ships can ghost through a defense perimeter to deploy an invasion force directly into the heart of key enemy locations.[2] However these craft do not contain any transportation department. Instead, they ride into battle with a captive wormhole linked to a distant Tomb World built into its hull.[2]

Despite their emphasis on transpiration, these vehicles are armed with twin-linked Tesla Destructors and are still formidable craft in their own right when compared to the attack craft of lesser races. 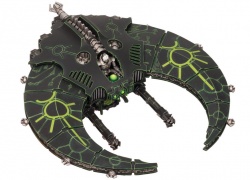