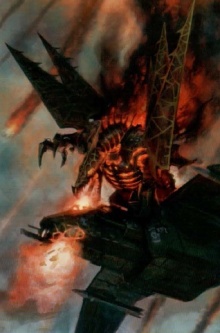 The Heldrake is a type of flying Daemon Engine employed by Chaos Space Marines.

A blasphemous fusion of man, machine, and daemon, these fell creatures of Chaos have enormous wingspans that make them even larger then Stormraven Gunships. Once fighter aircraft flown by noble Space Marines, these have since been mutated by the powers of the Warp into something far more hideous. Their original pilots are still inside, fused to their machines for eternity, and it is their anguish and hate that powers adds to the feeling of "wrongness" that a Heldrake gives. After centuries of gradually fusing to their machine and becoming overcome by the Daemon that inhabits it, in the end the pilot is only a fetal ball that burns deep within the core of the aircraft.[3] A crude hierarchy admits among Heldrake swarms, with the most powerful and experienced entities commanding their followers through pack dominance.[4]

Heldrake's are often the first wave of any full-scale Chaos Space Marine invasion. Fully capable of traversing space, Heldrake's will often cling to the underbelly of Chaos warships like a swarm of bats, feeding off the vessels energy through cables and pipes. Sometimes, Heldrakes will claim areas within warships for themselves, daring any to come oppose them.[4]

A Heldrake's preferred method of attack is to soar from high altitudes down upon unsuspecting enemy air support, ripping them to pieces with their claws, cables, and talons.[1][2][3] Heldrake's carry ranged weaponry in addition to their talons, usually mounting either a Hades Autocannon or Baleflamers, which spew daemonic bullets and fire.[2]