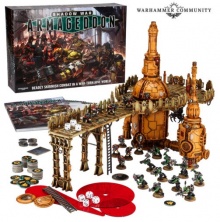 Shadow War: Armageddon is a board game released by Games Workshop in April 2017

Armageddon is wracked with war. As hordes of ferocious Ork warriors surge across the planet, they are met in combat by the combined forces of the Imperium.

Across Hive Acheron, elite fighters creep through the twisting pipes and gantries of the hive to strike deep within enemy territory. They are assassins and saboteurs – the kill teams of Armageddon, battling over precious promethium in order to win the shadow war and decide the fate of the battle that has engulfed the planet.

A standalone boxed game, Shadow War: Armageddon pits kill teams against each other in skirmish combat, with a detailed set of rules that are easy to pick up, yet deep enough to delight even the most seasoned wargamer. Containing an assortment of Citadel miniatures Shadow War: Armageddon brings the thrill of close-up and personal warfare to your gaming table, from single skirmishes to hard-fought campaigns that could decide the fate of Armageddon.