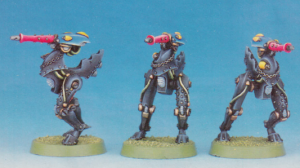 Hell-Knights are a type of Slaaneshi Daemon Knight.[1]

Hell-Knights are one of the most specialized types of Daemon Knights. Aside from Bolters, their main weapon is a Thermal Cannon which, albeit short-ranged, has enough power to pierce almost any armour plate with relative ease. Hell-Knights are often used to hunt down enemy Knights and Titans, exploiting their speed to attack from the sides and overwhelm opponents. In addition to this, they are perfectly suited to perform ambushes, and are often used in this respect. In packs, they can even destroy Imperator Titans, as was the case with the Praeco Deictus during the Battle of Kado.[1]

Hell-Knights are super heavy walkers and so cannot be pinned in combat except by other super heavy vehicles or Titans. Anything smaller will simply be pushed aside. Moreover, they are excellent at infiltrating enemy positions, setting ambushes, and attacking support detachments and artillery.[1]