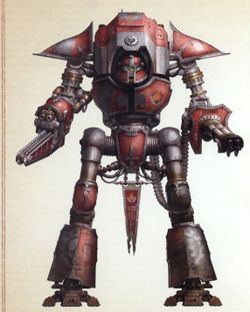 The Knight Acheron is a type of Imperial Cerastus Pattern Knight.

The devastation wrought by Knights-Acheron is terrifying to behold. Armed with a fearsome Reaper Chainfist, twin-linked heavy bolters and an Acheron pattern Flame Cannon, they are employed as weapons of extermination and to inspire fear in their foes. Nothing will sway their attack until the enemy is utterly crushed, never to rise again from the flame-scoured ruins of their strongholds.[1]

Acheron pattern Knights were configured as rapid moving strike units who rose to prominence during the legendary battles of the Great Crusade, but whose most terrible renown was to be found on the battlefields of the Horus Heresy. Rare, even in those ancient times for the singular difficulties of their construction, the Cerastus Knight-Acherons were amongst the most dreaded of their age. The Acherons’ machine spirits were regarded as particularly lusting for wanton destruction and only the strongest scion-minds could master them via the Throne Mechanicum, especially during the tumult of open battle.[2] Due to this, Scions rarely chose to ride the Acheron into battle voluntarily, accepting the task instead as an arduous duty to be taken for the good of the House. Those few pilots who willingly piloted these suits were known for their iron will or tortured souls.[3] 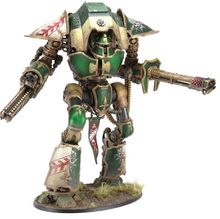