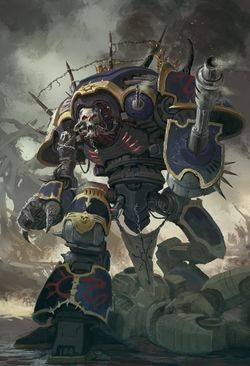 The Knight Desecrator is a type of Questoris Pattern Chaos Knight, that is a powerhouse at mid- to close-range combat.[1a]

Knights Desecrator possess potent mid-to-close range armaments that lend themselves towards dueling enemy war engines or monstrous beasts, or tearing down the foe’s fortifications. One arm typically consists of a Thunderstrike Gauntlet while the other mounts the fearsome Laser Destructor.[1a]

The Fallen Nobles who pilot Knights Desecrator are all cruel despots, well disposed to imposing their tyrannical will upon others. With their War Dog thralls’ Helms Mechanicum slaved to their own Throne, the Fallen Nobles coordinate vicious flanking moves and volleys of fire that drives their enemies from cover. These lords that pilot Knight Desecrators find expression in a desire to relentlessly annihilate every trace of their enemies. To these butchers it is not enough to simply defeat the foe, they must fell every opposing war engine and level every fortification. Only once their foes’ holdings are reduced to blasted wastelands and their enemies lie piled in corpse-mountains high enough to blot out the stars do the Knights Desecrator know even a moment’s satisfaction. Even then it is fleeting, for until the entire Imperium is reduced to ruin, these Fallen Nobles will know no peace.[1a] 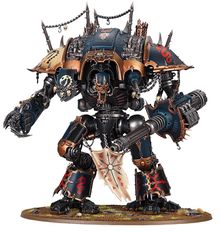