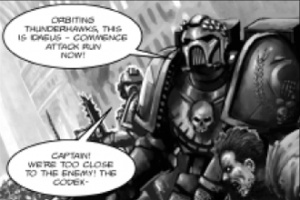 Idaeus was the former Captain of the Ultramarines' Fourth Company, who died shortly after passing his position on to his senior Sergeant, Uriel Ventris.

Unusually for an Ultramarine, Idaeus was a more on-the-hand thinker, adhering to the Codex Astartes only when he more or less needed to. He knew when to bend the rules of engagement and when not to, and trusted his gut instincts, even when every other sign told him things were going as planned. He was widely respected by the men of 4th Company, although his senior Veteran Sergeants, Uriel Ventris, had difficulty accepting his deviation from the Codex, even after winning victories with him over several decades[1a].

Idaeus's last command was on Thracia, where the Ultramarines were helping the Imperial Guard to suppress a Chaos-fueled rebellion. The 4th Company was charged with destroying a number of bridges that the enemy could use to outflank the Guard as it advanced on the rebel stronghold. As they were laying the charges on Bridge Two-Four, they came under attack by Chaos Space Marines of the Night Lords Legion. Although outnumbered and outgunned, Idaeus could not retreat and leave the bridges intact, so instead they held their positions[2a].

When the Night Lords advanced across the bridge, with the bodies of slain Ultramarines impaled on the front of their tanks, Idaeus's fury was terrible, and he led a counter-charge that drove the Night Lords back[2a].

With only seven Ultramarines left of his original force, Idaeus handed his Power Sword — which he had forged himself before the Corinthian Crusade — to Uriel, clearly intending that the Sergeant take his place, then stormed off alone to detonate the remaining charges with his Plasma pistol. He died in the midst of a squad of Chaos Raptors, who recoiled in terror as he set off the explosives[1b].

Idaeus's reputation for "unorthodox" thinking went beyond the Ultramarines chapter; shortly after Uriel was promoted to Captain, Inquisitor Ario Barzano requested the Fourth's assistance in traveling to Pavonis, confident that they needed someone capable of thinking outside the Codex[3a].

After the conclusion of the Pavonis campaign, Uriel remembered Lord Calgar's advice to him, that Idaeus may have been a great man, but he would have wanted Uriel to be his own man as leader of the company[3b]. Feeling that he had accomplished this, he decided that, instead of re-forging the blade of Idaeus's sword, which had been broken during the final battle of the campaign, he would keep the hilt, but forge a new blade himself[3c].

After Idaeus's death, the artificers of Konor created a master-crafted Plasma pistol named in his memory[4].