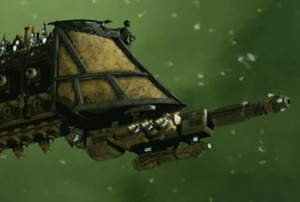 A Nova Cannon is a weapon of great size and destructive power used by ships of the Imperial Navy which propels explosive projectiles close to the speed of light.[1c] Nova cannon ammunition can frequently obliterate smaller vessels up to an effective distance of 10,000km from the point of detonation [2a].

While some variation exists, the basic design of a Nova Cannon consists of an array of gravimetric impellers which accelerate a projectile to close to the speed of light, making it a relativistic projectile. [1c][2a] However, Nova Cannons can only be mounted on large capital ships such as Cruisers and Battleships and in the ship's prow.[2a] This is because the immense recoil of firing the weapon can only be compensated for by the vessel's engines.[1c] While at least one Astartes Battle Barge is known to have been retrofitted with a nova cannon, doing so taxed the vessel to its limits: firing the weapon resulted in momentary power failure throughout the ship.[7]

The projectile itself varies in greater design and size, ranging upwards of fifty meters in diameter.[3] However, all share the common goal of causing immense destruction across thousands of kilometers of space. These can range from sophisticated plasma warheads which burn with the ferocity of a small star for a fraction of a second to implosion devices which exert destructive gravitational forces.[2a]

Because of the destruction it can cause over a vast area, a Nova Cannon projectile is not armed until a fraction of a second after firing, though by that time it will have already traveled tens of thousands of kilometers through space.[2a] For those captains which do mount them, a well-used Nova Cannon can be a terrifying weapon and psychological tool.[2a]

Although typically found on starships, there is at least one known ground-based Nova Cannon. It is found mounted on the legendary Ordinatus engine known as Oberon - the Ordinatus Armageddon.[8]

The Mars-pattern Nova Cannon is the most common of all Nova Cannon construction templates. Colossal weapons measuring hundreds of meters in length, they fire a gigantic shell at near relativistic velocities. The shell mirrors a conventional explosive shell, although on an extremely massive scale, and upon detonation will explode with more force than dozens of plasma warheads.[2b]

The Ryza-pattern Nova Cannon replaces the explosive shell used by the Mars-pattern Nova Cannon with a highly unstable plasma-based macro-bomb. These weapons use much more power than a Stygies-pattern, but are thought to be more effective. Weaponising such a huge quantity of plasma however carries its own risk, as overheating systems can potentially cause damage to the weapon and the ship itself.[2b]