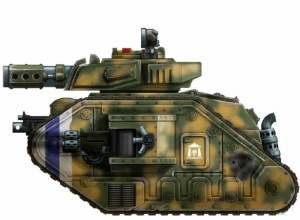 The Leman Russ Eradicator is a variant of the the Leman Russ Battle Tank chassis which replaces the standard battle cannon with a Nova Cannon. The tank proved itself during the fighting for Khai-Zhan, an Agri World one hundred lightyears from the Eye of Terror which had turned traitor, where it was used in large numbers by the Cadian Shock Trooper regiments fighting to bring the world back into the Emperor's light.[1a][2]

The Nova cannon mounted on the Eradicator fires heavy, high-calibre shells which are easily capable of blasting apart barricades and any infantry or vehicles hiding behind them. While lacking the range of the Vanquisher's or Exterminator's main weapon, the Nova cannon can target the enemy from greater distances than the Punisher Gatling Cannon and is capable of engaging more heavily-armored targets. However the shells fired by the Nova cannon have particularly unstable reactor cores, which can result in premature explosion during the loading process. Indeed most Imperial Guard commanders expect a small percentage of their own forces to be destroyed in this manner, though the rate of attrition is within acceptable limits given the amount of damage these tanks can do to the enemy. Those Eradicators built on the Forge World Agripinaa are particularly prized for the accuracy and reliability of their Nova cannons.[2]

The Eradicator is most effective supporting infantry forces fighting in areas such as cities and jungles, and it is easily replicated on dozens of Forge Worlds. For urban combat however the Eradicator does not feature the additional rear armour found on similar vehicles, leaving it vulnerable to attacks from behind.[1a][2]

Besides the turret-mounted Nova cannon the Eradicator is also fitted with a hull-mounted Heavy Bolter, Heavy Flamer or Lascannon. If fitted with side sponsons these can mount additional Heavy Bolters, Heavy Flamers, Multi-meltas or Plasma Cannons. A Searchlight and Smoke Launchers are standard while modifications include Camo Netting, a Dozer Blade, Extra Armour, a Hunter-Killer Missile, and a pintle-mounted Heavy Stubber or Storm Bolter.[1b] 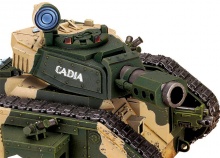