Sepheris Secundus is a world of immense mineral wealth, city-sized mines, billions-strong hordes of serfs and the sharpest divide between the elites and the masses in the Calixis Sector. It is a grim place of snow and twilight, feral mutants, and lives spent in back-breaking labour deep beneath the ground. The Imperium's eagerness to exploit Sepheris Secundus's vast resources is such that the planet is, at the same time, the richest and poorest world in the sector.[2]

Sepheris Secundus's climate is cold and stormy, its surface obscured by a mantle of cloud. It has no oceans save for the small polar seas, so the moisture in its atmosphere comes from below the crust, spewed out from failed mine workings or natural geysers that pockmark the planet like pustules. Its surface is split between the vast open mines like deep scars in the crust and the dense, snow laden forests broken only by the ruins of failed kingdoms that tried to claim Sepheris Secundus in the past. With its endless blizzards, widespread ignorance and antiquated methods for doing everything, Sepheris Secundus would be a meaningless backwater were it not for the enormous mineral wealth beneath its surface.[2] 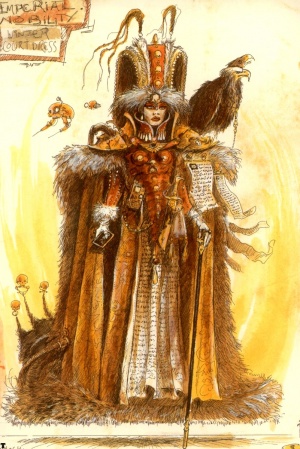 While the whole Imperium is a feudal empire, feudalism is an extreme on Sepheris Secundus. Everyone born on the planet must have a master to whom they pay nine-tenths of everything they produce, which for most citizens means the ore they hack from the rock faces of the planet's mines. Queen Lachryma III, the planet's absolute monarch, sits at the top of this feudal system. The rights to the labour of these billions of serfs belong to the barons appointed by the queen or to noble families and business consortiums that purchase them from the crown. The queen's own master is the Imperium, to whom she hands over truly staggering amounts of ore, metals and raw fuel to fulfil the planet's tithe. Sepheris Secundus's tithe is the highest in the Calixis Sector, and without its immense output of raw materials, the economy of the whole province would be badly unsettled.[3a]

Two principal forces maintain Sepheris Secundus's feudal system. The first is the weight of tradition: every serf labouring in the mines is doing what his father did and his grandfather before that, often at the same rock face. The second force is physical violence. One of the reasons that Sepheris Secundus's culture is so primitive by many standards is that weaponry and other technology is monopolised by the crown. The queen's Royal Scourges are equipped with lasguns, grenades and chainblades, contrasting with their gaudy, stained-glass-like armour. Though few in number, the technological advantage that these troops possess has been enough to put down a great many uprisings in the mines of Sepheris Secundus, and the planet's history is littered with massacres where thousands of serfs fell to volleys of lasgun fire.[3a]

Gorgonid Prime — is a vast, mining complex, one of the largest on the planet. The extracted ore rises up through a variety of cranes and elevators, in order to then move to the spaceport, where the ore is sent for sale to other planets. Many serfs constantly working here, in the morning going to mine, and in the evening - returning to their miserable homes. Almost all serfs spend their entire lives in Gorgonid Prime, never go beyond it. Barons closely watching for ore mining, and withdrawn from serfs 9/10 of all mined materials. The whole life of serfs is deep-regulated dependent on the whims of the barons - even marriage is permitted or prohibited directly by barons.[3b]

The Gorgonid inhabits a wide variety of cults and secret societies, some of which are particularly dangerous.[3b]

Stable warp routes link Sepheris Secundus to Scintilla, Iocanthus, Fedrid and Ganf Magna. Sephiris Secundus is also one of the planets on the path of The Misericord.[2]