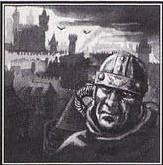 Image of a Feudal World[1]

A μ-class, feudal world[1] or medieval world[2] is a classification of world existing in a technologically medieval state. The most advanced such worlds possess black powder weaponry. The tithes from these planets are slightly more than those of Feral Worlds (generally from Solutio Prima to Solutio Extremis), thanks to the development of agriculture. A feudal world typically has a population of 10,000,000 to 500,000,000 people.[1]

Feudal worlds are self-sufficient, and due to dependence on agriculture, a large part of the populations of these worlds are peasants, usually ruled by warrior aristocracies. Feudal worlds are of relatively little use to the Imperium; the true position of their place in the universe may constitute something of a culture shock to the inhabitants, making them poor material for Imperial service - although the warrior nobilities are often a source of recruits for the Space Marines.[2]