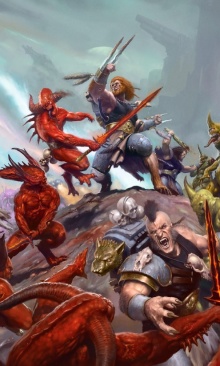 The Battle of Nurades was an event in the closing days of the 41st Millennium. It marked the return of the Wulfen to the Imperium.

The crisis on the Hive World of Nurades begin with a terrible Warp Storm. Soon, Daemons and Mutants ran amok across the planet, overrunning the PDF. Help eventually came in the from of the Space Wolves Great Company of Harald Deathwolf. At Hive Predomitus, Thunderwolf Cavalry shattered the Daemonic battleline while beneath the Hive itself hit-and-run battles raged against the Tzeentch legions of the Daemonic Herald Slithertwyst. Following these two victories, the Wolves moved on Hive Genos to end the siege and pushed to the northern polar reaches of the planet, moving on the abandoned fortifications the Daemons used as a base of operations.[1a]

The Deathwolves of Harald Deathwolf then fell into a massive Daemonic ambush. Harald and his forces would have been doomed if not for the dramatic return of the lost Wulfen, who swept aside the Daemons and saved their ancient comrades. The Daemons were banished shortly after, leaving the Governor of Nurades to put down the mutant rebellion.[1b]

In the aftermath of the battle, the Dark Angels arrived to recover relic blades known as the Seven Shadows. However they recovered a surviving Scout who was subsequently interrogated by Librarians, his mind showing that he was assailed by the Wulfen. The Dark Angels became convinced that these Space Wolves-related creatures were Daemonic taint and must be destroyed.[1] In truth, this recovered Scout, Arhad, was the Changeling.[2] Shortly after the Grey Knights arrived at Nurades and subjected the tainted world to Exterminatus.[1c]