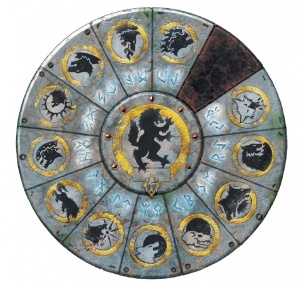 The badges of the Space Wolves Great Companies

The Great Companies are the twelve primary organizational units of the Space Wolves, analagous to a Company in another Chapter. In defiance of the Codex Astartes, which dictated the reorganization of the Adeptus Astartes after the Horus Heresy, the Space Wolves Chapter has twelve companies instead of ten[1a].

Each Great Company is responsible for its own recruitment, maintenance, and running, each acting as a separate force altogether, each lead by a Wolf Lord in a semi-feudal system. The Wolf Lord of the leading Great Company is also the Great Wolf, the Chapter Master of the Space Wolves[1a].

Great Companies are named and represented according to their current Wolf Lord as well as their past deeds and exploits. Some Great Companies have used dozens of sigils throughout their history, while others have maintained the same one for long periods. Some like the Spirit Wolf have not been seen for millennia, while others like the Hunger Skull of Jorghun Vor are seen as bad omens.[3]

The current Great Company's of the Space Wolves consist of:[2]

There was once a 13th Great Company, and rumors still abound as to the reason for its disappearance[1b]. Some state that they disappeared into the Warp during the attack on Prospero, the traitorous Thousand Sons' homeworld; others claim they disappeared after the Primarch Leman Russ himself went missing. Regardless, there is currently hardly any information concerning the company in the Imperial records.[Needs Citation]