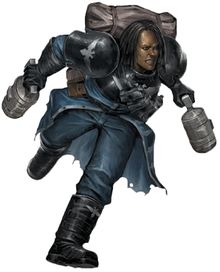 Breachers are demolition specialists of the Imperial Guard charged to breach enemy fortifications as well as to supervise the erection of fortifications for their own positions.

Breachers are found in many Imperial Guard Regiments, ranging ahead of the main force and demolishing any impediments to the unit's progress as well as hurling explosives against the enemy in combat. They are apt at locating and bypassing enemy traps, cutting through razorwife, fording ditches, climbing over high ditches, and blowing holes in any type of fortification. To this end, these troopers often carry a range of specialized equipment to assist their task. These can range from basic tools such as axes and wire cutters to hazard-sense prognosticators and null-vox jammers. Though well trained and usually well equipped, Breachers carry a high mortality rate for being the first trooper through any opening is incredibly dangerous. As a result, more competent commanders will often herd less vital troops through any breach first.[1]

Breachers are to be found at many levels of an Imperial Guard Regimental structure, from troopers who are particularly talented with grenade placement to elite scouts ranging behind a force to detonate bridges. Some larger or more specialized regiments train all of the troops in a particular squad in advanced demolition tactics, so that they can make better strategic use of explosives against their foes.[1]

Breachers are trained in a variety of methods, mostly through natural progress on selected candidates. Breachers from less advanced worlds are often taught to use their natural senses and fieldcraft to conduct their duties.[1]