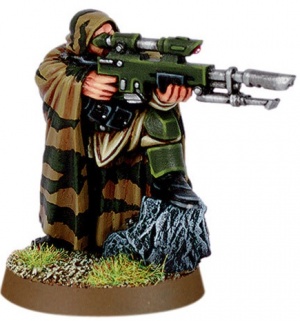 Sharpshooters are troops of the Imperial Guard trained to act as snipers. They typically are armed with Long-Las rifles.[1]

In battle, the sharpshooter operates as part of his squad or platoon, serving as a line trooper according to the specific doctrines of his regiment. In many cases the presence of a sharpshooter in a unit is not at all obvious, especially where the designation is an informal one. In other cases the sharpshooter might wear some form of badge or other insignia, though generally in such a manner that enemy snipers cannot pick him out from his peers.[1]

The Troopers who possess these particular and deadly skills often carry specialised targeting equipment. Usually, this includes a powerful scope mounted on a main weapon, but sometimes takes the form of helmet-mounted sighting devices or even permanently grafted-on cybernetic augmentations.[1]

The Catachan Jungle Fighters do not utilize Sharpshooters like other regiments, instead using elite snipers picked from their finest marksmen, these are known as Veteran Snipers.[2]