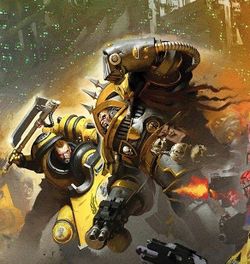 Kroeger battles Fafnir Rann during the Siege of Terra[3c]

Kroeger was a Warsmith and later Captain of the Iron Warriors Grand Company under the command of "The Warsmith" during the Siege of Hydra Cordatus.

Kroeger served as a trooper in the 23rd Grand Battalion under the command of Warsmith Harkor during the Horus Heresy. After Perturabo stripped Harkor of his rank for disobeying orders during an assault on an Imperial Fists citadel on Hydra Cordatus, Kroeger was promoted to Warsmith and given a spot in the Trident, passing over Toramino. Kroeger proved to be an outside-thinker within the Triarch, often going for the most brutal and simplest options, a concept that appealed to Perturabo after the Battle of the Phall System. He still retained much of his sense of honor, being disgusted by the state of the Emperor's Children. Kroeger did not want the position he was promoted to, and was the victim of the constant scheming of ex-Triarch Harkor.[2]

While on Iydris, Kroeger began to succumb to a level of bloodlust despite attempting to protect Perturabo from the machinations of Fulgrim. In a frenzy while fighting Eldar Wraithguard, his forces slew Harkor.[2]

During the Siege of Terra Perturabo placed Kroeger in charge of the operation to capture the Lion's Gate Spaceport, something which shocked fellow Triarch Forrix. Perturabo appreciated Kroeger's bluntness, and hoped that he could use it to subvert Dorn's expectations of a complicated assault plan.[3] Kroeger's initial offensive failed in the face of the Emperor's psychic shield, but sent Forrix and 1,000 Iron Warriors behind enemy lines for an infiltration operation.[3a] During the renewed attack on the Starport, Kroeger engaged Imperial Fists commander Fafnir Rann in combat and wounded him.[3b]

Once a proud warrior of his Legion, Kroeger gradually descended into the mad bloodlust of a Khorne Berzerker. His comrades Honsou and Forrix regarded him as little more then a wild animal in the heat of battle.[1a] His descent into insanity made him incapable of succeeding the Warsmith, an honor eventually given to Honsou.[1b]

During the Hydra Cordatus campaign, Koreger took a female Imperial Guard Captain, Larana Utorian, as his personal slave. While attending to her new master's armour, the prisoner realized that his armor held the essence of a Daemon. Communing with it, Larana learned that the creature had grown tired of Kroeger's petty slaughtering and tempted the slave to don the Daemonic armor.[1c] Upon entering his personal chambers, Kroeger was slain by his slave, now completely possessed by the creature that dwelt within his armor.[1d]