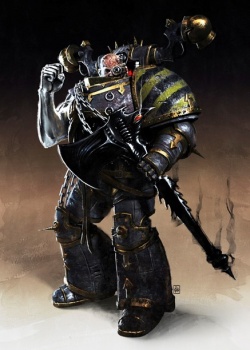 Honsou after the events on Medrengard[10]

Honsou is the Warsmith of an Iron Warriors Grand Company. He is notable for leading an army 17,000 strong, comprised of Traitor Marines, Xenos and Renegades, in the Invasion of Ultramar in 999.M41.[Needs Citation]

Created a Chaos Space Marine sometime in M41, Honsou was looked down upon by the other Iron Warriors, due to the taint of his gene-seed with that of the hated Imperial Fists. He was often referred to as "Half-Breed".[1x][Needs Citation] Unlike many of this fellow Chaos Marines, who were veterans of the Long War, Honsou was a younger Marine, but despite his youth and his "tainted" heritage, he rose through the ranks of his Grand Company through bravery, tactical skill, and audacity.[1x][Needs Citation]

He took part in the besieging of the Adeptus Mechanicus fortress of Hydra Cordatus, as one of the three champions of Barban Falk, known simply as The Warsmith. His chief rivals were Captains Forrix and Kroeger. Although Honsou held a roughly equal place in The Warsmith's retinue, he was denied the formal rank of Captain, and sought to win the rank at the end of the Siege.[1x][Needs Citation]

The fortress, which had in fact been designed and built by Barban Falk during the Horus Heresy, housed a large supply of stable gene-seed belonging to the Imperial Fists. During the building of the so-called Second Parallel, Honsou distinguished himself by leading the counterattack against a sortie by the Jouran Dragoons garrisoning Hydra Cordatus, where he killed the Imperial Castellan, Colonel Vauban, despite losing his right arm to Vauban's power sword. In the aftermath, The Warsmith berated Forrix for failing to breach the fortress wall with a mine, and Kroeger for failing to protect the Iron Warriors' heavy siege guns during the counterattack, but praised Honsou for his success.[1x][Needs Citation]

The siege was successful, elevating The Warsmith to Daemonhood, and before he disappeared into the Warp, he named Honsou his successor. Forrix and Kroeger had both been killed, and The Warsmith had already had judged them unfit to succeed him. Honsou, despite his "half-breed" heritage, had the ambition and the ruthlessness to then lead the Grand Company.[1x][Needs Citation] 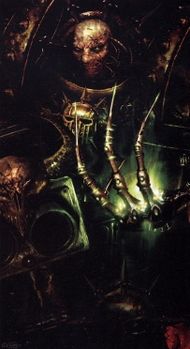 Honsou returned to Medrengard with the gene-seed captured from Hydra Cordatus and installed himself as the lord of The Warsmith's fortress of Khalan-Ghol.[Needs Citation]

Though he claimed that the gene-seed was sent to Abaddon the Despoiler, Honsou kept some for himself. Using the captured gene-seed, he constructed an unusual manufacturing system, the Daemonculaba, which allowed him to create new Iron Warrior Chaos Space Marines. However, the Daemonculaba was far from perfect, and many of the candidates were flushed out. Many did not survive, and those that did were horribly mutated beasts called the Unfleshed, and were cast out from Honsou's fortress.[Needs Citation]

Honsou then led his warriors into a civil war with two rival Warsmiths, Lord Toramino and Lord Berossus, as he refused to uphold his predecessor's promise to share the stolen gene-seed amongst the Iron Warriors commanders. During this war, the exiled Ultramarines Captain Uriel Ventris led a group of renegade Space Marines to infiltrate Honsou's fortress in a misson to destroy the Daemonculaba. They were captured and brought before Honsou who thought they were mercenaries acting on behalf of Toramino; he also took an interest in Pasanius' living metal bionic arm (who had been exiled along with Ventris and bound by a Death Oath). Afterwards the prisoners were sent to be tortured by the Savage Morticians, and Pasanius' arm was cut off for Honsou to wear. Honsou later became enraged with the Savage Morticians, as Ventris was able to escape along with a few survivors.[Needs Citation]

Lord Berossus made one final push in which he managed to successfully storm Khalan-Ghol and duel with Honsou. However, Honsou defeated Berossus with the support of his Daemonhost bodyguard Onyx. After Berossus' death, his men defected to Honsou's side after he swayed them to join him in fighting against Toramino. During this battle, Uriel Ventris had infiltrated Honsou's fortress once again, but this time leading a band of the Unfleshed. Ventris destroyed the Daemonculaba and set free the Heart of Blood, a powerful Daemon captured by the Iron Warriors which had acted as a psychic barrier against enemy Sorcerers. When the daemon was set free, the psychic defences of the fortress fell, allowing Toramino's forces to attack the fortress with psychic attacks. Honsou returned to his fortress and cornered Ventris and Pasanius before they made their escape. Before Honsou's retinue had a chance to kill the Ultramarines, the Unfleshed arrived to attack and killed the Iron Warriors. Ventris also shot Honsou in the head who was fleeing from the battle.[Needs Citation]

After the Ultramarines had left, Honsou was found to have survived. He then discovered the Heart of Blood collapsed on the floor after exhaustion from winning its earlier battle with its rival daemon, the Omphalos Daemonium. Honsou went on to direct the Heart of Blood against his rival Toramino's army. Given the extent of the Daemon's power, this would have undoubtedly won the war for Honsou. Despite the loss of the Daemonculaba and many of his men, Honsou consolidated his power, and began rebuilding his army. His last known action on Medrengard was to invite the remaining renegades who had survived, including Cadaras Grendel and Ardaric Vaanes, into his army, and it was also revealed that within his new retinue was The Newborn, a clone of Uriel Ventris, created earlier by the Daemonculaba before it had been destroyed.[2]

Though Honsou had triumphed over rival Warsmiths Berossus and Toramino, he had also suffered defeat at the hands of Uriel Ventris. Soon thereafter, he departed Medrengard on a mission of vengeance. Honsou and his retinue arrived at a space station orbiting Tarsis Ultra. They quickly slaughtered the space station's crew, and then commandeered multiple orbital torpedoes. Honsou infused an experimental genetic growth strain, known as the Heraclitus strain, into the warheads of the torpedoes and launched them against Tarsis Ultra. The torpedoes detonated in the planet's atmosphere, spreading the Heraclitus strain across the planet's surface. Tarsis Ultra had recently repelled an invasion by Tyranids thanks to Uriel Ventris and the Ultramarines. However, the Tyranids left some plant spores behind. As intended, the Heraclitus strain interacted with the Tyranid spores, causing the plantlife to rapidly grow and spread at a rate of several square kilometers per minute. This caused a chain reaction which, ultimately, caused billions of citizens of Tarsis Ultra to perish, and rendered the planet itself a cold, lifeless rock. All this was done to spite Ventris and issue the galaxy a warning: nobody trifles with Honsou without paying an extremely high price.[4]

Honsou travelled to the Maelstrom in search of new recruits as he planned to lead a mighty army to Ultramar, razing it to the ground, and the annual Skull Harvest hosted by Huron Blackheart which entails mighty warlords bring their warbands to the planet of New Badab seemed to be an ideal way to raise an army. Honsou arrived just prior to the start of one, set up a camp with his fellow Iron Warriors, and participated in the event with the main, underlying rule being that whoever slays the leader of a warband may claim the warband for their own. Honsou sent The Newborn, Uriel Ventris' clone and an ex-member of the Raven Guard to fight the other Warlords' champions. They both fought well, swelling Honsou's army to the size of 5,000.[3]

Eventually Honsou, a Khornate Champion named Pashtoq, and a Slanneshi Champion named Noshta were the only participants left. Pashtoq upheld a deep dislike for Honsou, mainly because Honsou killed one of his mighty champions with the help of his bionic arm, and the fact that Honsou was a "half-breed". Noshta was swiftly defeated, and Honsou was left fighting Pashtoq. He managed to destroy Pashtoq's Daemon Weapon with his own, but Pashtoq called for one of his Champions to bring him a new one. In response, the Champion - who had sworn allegiance to Honsou - plunged the new weapon into Pashtoq's chest. Honsou then beheaded Pashtoq, thus winning the Skull Harvest. Noshta, who had only been wounded, swore him allegiance, and Honsou left New Badab with a force of almost 17,000 warriors. But before he left, Huron Blackheart warned him, telling him to kill his Champions as soon as they would become unuseful, to prevent a possible mutiny. Huron's final words to Honsou before he left New Badab were: "Always remember. The strongest are Strongest alone."[3]

Using Morianna, the damned seer of the Abaddon the Despoiler, Honsou was able to free the Daemon Prince M'kar, an ancient enemy of the Ultramarines who had been imprisoned on the Indomitable space fort by Chapter Master Marneus Calgar. With his army ready, Honsou then unleashed his plan for revenge against Uriel Ventris: the complete destruction of Ultramar. Striking first at Tarentus, Honsou had M'kar unleash his Daemon army on the planet's domed city, destroying all its inhabitants. It was only after this that Honsou realized that M'kar had forced himself into a position of sharing command of the army (which the daemon had dubbed the Bloodborn) with Honsou, a situation neither could tolerate for long.[Needs Citation]

Honsou later took Cadaras Grendel, Ardaric Vaanes, and The Newborn to Calth, Ventris' homeworld, with instructions from M'kar to destroy the Tomb of Ventanus, a famed Ultramarines Captain who had defended the planet from the Word Bearers during the Horus Heresy, as M'kar himself was unable to go near Calth. Before being accepted into the Ultramarines, Uriel Ventris had discovered the tomb in his youth, so its location was something The Newborn knew. Vaanes was captured in the initial battle for Guilliman's Gate, but Honsou, Grendel, and The Newborn were able to find the tomb. As they prepared to destroy it, Honsou investigated Ventanus' sarcophagus, finding the Shard of Erebus, a combat knife buried with the Captain. Honsou surmised that due to M'kar's fear of Calth and Venatus's wargear the knife was capable of harming the Daemon Prince. When Ventris arrived with his squads and a group of Raven Guard, Grendel and the Blade dancers were killed. Honsou then charged The Newborn with killing Ventris, but Ventris was able to defeat his clone. A battle erupted, during which Honsou mortally wounded Vaanes, but the Iron Warriors were in turn defeated by what appeared to be the ghost of Remus Ventanus and the Legion of the Damned. With his Iron Warriors dead, Honsou activated the trigger for the bombs intended to destroy the tomb, burying Ventris and his allies. Although Ventris, Pasanius, and most of the Astartes present survived the explosion, Honsou's own body was never found. The drilling machine that had carried the Iron Warriors to the tomb had also disappeared.[6]

As it turned out Honsou had indeed escaped the cavern, and hid in the warrens of Calth's surface cities until he could steal an orbit-capable shuttle. Despite a dogged pursuit by Inquisitor Namira Suzaku, Honsou eluded her and her retinue and escaped the planet. He is currently at large.[8]