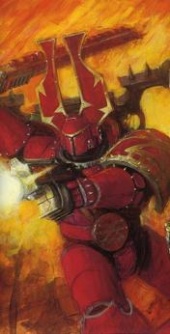 Khorne Berzerkers are Chaos Space Marines dedicated entirely to glorifying the Chaos God Khorne through hand to hand combat. Driven by bloodlust, their only purpose is to kill and destroy their enemies in the name of Khorne. Eschewing long ranged weaponry, Berzerkers make almost exclusive use of close combat weapons, in particular the chainaxe. Chainswords, scimitars, ritual knives, Bolt Pistols, and other brutal close-quarters weapons are also frequently used.[7] However, they are known to use almost anything as a weapon at times, often continuing fighting even when in possession of no offensive weapons other than their own bodies.[1]