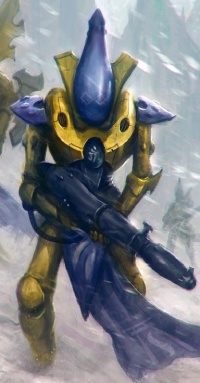 These warriors are saved through the guidance of a Spiritseer who removes the fallen warrior's Spirit Stone from the Infinity Circuit in order to place it into a psychoplastic body made of Wraithbone. Through the act, the robotic body is empowered with a living intellect that guides its artificial nature. This is done only in the times of emergency or when there is a lack of warriors. This is because the act of placing an Eldar essence into such a construct is considered abhorrent among their race, akin to necromancy, but none can deny the resulting warrior that emerges from the combination that adds to their arsenal against their enemies.[Needs Citation]

However, the Wraithguard suffer from a phenomenon known as "Wraithsight" which alters their perception of the world from that of mortals, and causes them to react more slowly to changes on the battlefield. As a result, they are often led by spiritseers, Eldar psykers who specialize in guiding and summoning the souls of the dead. The Wraithguard are also fearless in battle due to the nature of their bodies and undead souls.[2] The most feared and wrathful of the Wraithguards are known as Wraithblades, specializing in close-quarters combat.[3]

Craftworld Iyanden features many of these 'Ghost warriors' due to a Tyranid attack on their world which ravaged Iyanden's population.[Needs Citation]

In war, the Wraithguard tower over their guiding Warlocks on the battlefield, where they bring death through the reality shattering Wraithcannon or soul-stripping D-Scythe.[3]