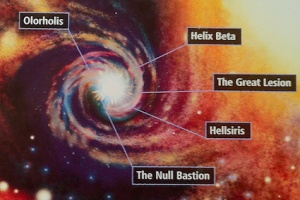 The Maelstrom is a majoris grade interference between the warp and real space.[1a]

Second only to the Eye of Terror in size, scope, and intensity, The Maelstrom is a massive Warp Storm and spatial vortex that lies near the center of the Galaxy. A place where the material universe and the Warp overlap, the laws of physics do not apply and it is infested with all kinds of cosmic horrors, such as Daemons and hordes of Chaos Mutants. Off limits to the Imperium, it has served as a refuge for pirates, brigands, outcasts, and Chaos Space Marines.[2]

A volatile region to live in, the Imperium struggles to retain control over the regions of space surrounding the Maelstrom Zone. The whole region itself is plagued by unpredictable spatial phenomena such as ionic reefs, null zones, and nomadic singularities. Warp travel is also highly unpredictable and hazardous, and this perhaps more than any other factor is responsible for the fact that the Maelstrom Zone has remained untamed by the Adeptus Terra.[2]

Regions of the Maelstrom were the site of the infamous Badab War in late M41.[2]

During the Thirteenth Black Crusade, the Maelstrom became a part of the Great Rift which spans the Imperium from one side to the other.[3]

The Maelstrom as a Refuge

After his defeat at the end of the Badab War, Lufgt Huron, master of the Astral Claws escaped into the Maelstrom.[1b]

Currently the Maelstrom is the home of the Red Corsairs on the world of New Badab.[1a]

Sectors and Subsectors Surrounding The Maelstrom

Notable planets in and around the Maelstrom Zone

Other Locations and Anomalies of the Maelstrom