The Chaos Space Marines are superhuman traitors grown strong on the power of the Dark Gods. The ultimate nemesis of the Imperium, they surge from hidden lairs and hellish warp storms to fall without warning upon their victims. Murderous warriors clad in baroque power armour fight alongside teeming human Cultists and hulking Chaos Terminators; gargoyle-mouthed daemon engines stomp to war alongside growling battle tanks and hosts of malevolent entities spawned from the warp. Leading this malefic throng are the Champions of Chaos, evil warlords who have plagued the empire of Man for ten thousand years and more. Now, as the skies bleed raw Chaos energy, their time has come. Let the galaxy burn! 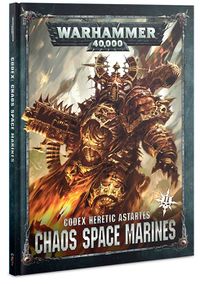 In 2019, Games Workshop released a second edition of the Codex to correspond with the release of Vigilus Defiant, Vigilus Ablaze, and Shadowspear. This newer edition contained additional rules for newly released units.[2]