"We must scour them from the stars before they do same to us." - Ortan Cassius on the Tyranids.[11] 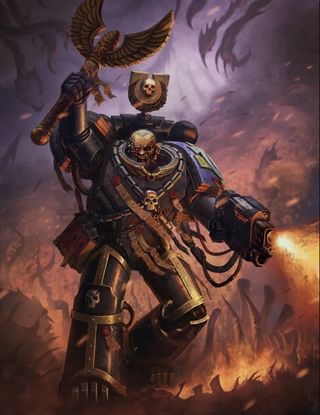 Ortan Cassius is Master of Sanctity of the Ultramarines.

At almost four hundred years old, Cassius is the oldest member of the Ultramarines Chapter (excluding those interred inside Dreadnoughts). He has perfected his oratory skills to allow the Ultramarines to be carried across hundreds of worlds by his command alone.[2]

Cassius was inducted into the Chaplaincy very early into his career. Despite his relative inexperience, many Battle-Brothers were inspired by his righteous hatred for the enemies of mankind, although some of the Chapter's seasoned veterans considered him somewhat reckless and overly aggressive.[10]

Sometime before the Tyrannic Wars, Cassius joined the Deathwatch for a time and helped purge Genestealer Cults on Ghosar Quintus, the Imperium's first major encounter with such xenos cabals. During the operation he formed his own legendary Kill Team.[7]

During the Battle for Macragge, Cassius fought by the side of Chapter Master Marneus Calgar, to repel Hive Fleet Behemoth. During the last stages of the Battle, he accompanied the relief force that rushed to the polar fortresses to relieve the embattled First Company, though it was already too late for these veterans. Few members of Cassius's unit survived the brutal close-quarters combat that followed, and Cassius himself was incapacitated by a rampaging Carnifex. He survived by only the slimmest of margins, clinging to life until the Apothecaries could tend to his ruined body, which was extensively rebuilt with bionic parts.[2] Scarcely a centimetre of his remaining organic flesh is free of scars, and while his voice has lost none of its fervour, his bionic components can never fully compensate for the rents torn in his throat.[5]

After the Tyranid invasion had been repulsed, Cassius withdrew the Banner of Macragge and only allowed it back onto the field after the Ultramarines' strength had been fully restored to their former numbers. Cassius also petitioned Calgar for permission to form a new unit of Tyrannic War Veterans, from the most seasoned Ultramarines to have fought at the Battle for Macragge and subsequent conflicts, which was granted. That Cassius, a Chaplain, decided to deviate from the Codex Astartes, which does not authorize such a unit, speaks volumes about his belief in the seriousness of the Tyranid threat[2]. In M41 Cassius leads his Battle Brothers in a series of desperate battles to purge the Genestealer Cult from Torhaven.[6]

His oratory skills are such that he can inspire Ultramarines to greater feats of heroism than many others can, though he is also wise enough to know when his men would benefit more from regrouping. Despite his increasing age, he remains a ferocious warrior and is in particular a master of combat against Tyranids, due to his extensive combat experience of fighting against them.[2] Cassius is now heavily scarred, with leathery, weathered skin and white hair.[1] Cassius is also the only warrior of the Ultramarines permitted to call Marneus Calgar "young Calgar"[2].

Cassius fought with the Ultramarines Chapter on the planet of Kolovan with Tyranids of the Hive Fleet Kraken.[8a] There he killed the mighty Swarmlord[8b] who later was ressurected on the tyranid's hive ship.[8c]

Since the opening of the Great Rift and the fury of the Plague Wars, much of the Ultramarines strength has been dedicated to battling the forces of Chaos. However Cassius remains focused on the Tyranid threat.[9]

Cassius carries the standard equipment of all Space Marine Chaplains, including the Crozius Arcanum (cast in the shape of a Tyranid skull) and Rosarius. Instead of the traditional Bolt pistol, Cassius is armed with the Infernus, a master-crafted Combi-Flamer which he forged and assembled himself[2]. He may also be equipped with Frag Grenades, and carries Terminator Honours, permitting him to wear Tactical Dreadnought Armour as needed.