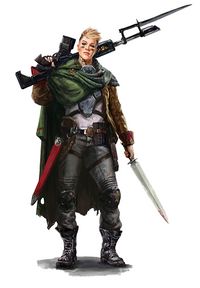 Sergeant Tona Criid was a distinguished non-commissioned officer of the Tanith First and Only during the Sabbat Worlds Crusade.

Criid was one of many civilians from the Hive city of Vervunhive on Verghast, recruited after the city was destroyed by the forces of Chaos[2], and helped smooth the way for the numerous female troopers absorbed into the formerly all-male Tanith's ranks.

Tona Criid started life as a down-hive woman on Verghast, a rough veteran of a dozen different Hive gangs, with the tattoos to show it. She was around sixteen years of age at the time of the Siege. By chance, she was near the transit station at Veyveyr Gate when explosions and shrapnel killed Livy Kolea, but not her two young children, Dalin and Yoncy.[1a] Criid saved them from falling debris and kept them in her care for the duration of the Siege, appointing herself their "Aunt Tona."[1b]

Tona and her two young charges struggled to survive in the weeks of the Siege, often taking turns to sneak into the camps of the newly-arrived Imperial Guard reinforcements to steal food. On one of these trips, Tona was spotted by a trooper of the Tanith First, Dermon Caffran, but she fled before he could make contact.[1c]

On her second trip to the Tanith's camp, when both children were close to starving, Tona was caught in the act by Caffran, who had been watching out for her. She fought him off with a knife, even as he pleaded that he wanted to help her, since she, like the Tanith "Ghosts," had no home of their own. Tona fled the camp, abandoning the backpack with her stolen supplies. To her surprise, Caffran dragged the pack outside the camp and left it for her. She was even more surprised to see he had added water, first-aid supplies, and his own laspistol to her stash. That night, when she and the children went to sleep with full bellies for the first time in weeks, she also found a regimental pin from the Tanith first - Caffran's "invitation" for her to join the Ghosts.[1d]

During the third, desperate defense, Tona and her two children took shelter with the Ghosts, and she and Caffran exchanged names, even as they both fought desperately against the Zoican soldiers.[1e][1f] When Caffran noted that she was not the children's mother, she defiantly shouted that they were all she had, and no one would take them from her.[1f]

Tona and the children survived the Siege, and Tona eagerly accepted Warmaster Macaroth's Act of Consolation to the citizens of the devastated Vervunhive, to join the Imperial Guard[2] - on the condition that she be allowed to choose the Ghosts as her unit.[Needs Citation] She and Caffran adopted Dalin and Yoncy, who accompanied the Ghosts on their future campaigns.[1g][2] Ironically, the children's real father, Gol Kolea, had also joined the Ghosts as a Sergeant, but continued to believe that his entire family had been killed in the Siege[1g] until he saw Criid holding a pendant that contained their pictures.[2]

Following the regiment's actions in the retaking of the city of Cirenholm, a combination of battlefield casualties and the pressing need to more fully integrate the Verghastite elements of the Tanith First led Colonel-Commissar Gaunt and Commissar Hark to put forward a number of Verghastite Troopers for consideration for promotion. Gaunt suggested Criid, but Hark disagreed, citing that the pride of the men of Verghast may be damaged further by the perception that the Verghastite women were the best that they could offer, combined with the fact that a number of prominent Tanith holdouts still disliked the influx of women into the regiment.[3]

As with some Tanith, Tona carried some personal additions to her wargear; in her case, she owned a vibro-blade, given to her by her brother Nake.[1d]