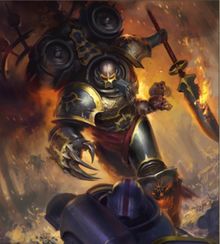 Haarken Worldclaimer is a sinister Black Legion Chaos Lord and Raptor leader. He is known as Herald of the Apocalypse and Proclamator of Abaddon’s Reign.[2]

Haarken Worldclaimer serves as the mouthpiece for Abaddon, a task he takes heinous joy in. It is he who proclaims the death of worlds, often by driving his spear into the planets surface. Commanding a large Chaos Raptor contingent within the Black Legion, Haarken's forces serve to sow discord and terror in preparation for the arrival of the main fleet. Upon the arrival of his Lord's forces, Haarken targets enemy command and supply centers. He will butcher a planet's populace to break its will, easier allowing its conquest by Abaddon.[5]

Despite his battlefield role, Haarken is also known as a scholar of the Occult. He has studied the Grimoire Nostromo of Konrad Curze, the Clotted Scrolls of Angron, and even the Book of Magnus at the cost of his sanity. Haarken is known to utilize fear in battle much as the Night Lords do, broadcasting terrifying messages and sounds across his own Vox array. The effect of this is devastating and has been said to drive men to suicide.[3]

Haarken was first sent to conquer the embattled Imperium world Vigilus and claimed it would fall to his forces within 80 days.[1] During the Chaos invasion of Vigilus in the War of Nightmares, Haarken sought to capture the primary Imperial Hive spires from the top-down with his Raptor. Warp Talon, and Heldrake cohorts. Ultimately however he was foiled by Marneus Calgar, who burnt down and toppled the spires to prevent their use by Chaos forces.[4] After Vigilus, Haarken was tasked with Abaddon to lead a massive Invasion of the Nachmund Gauntlet.[6]

In combat, Haarken wields the legendary Helspear and utilizes a Laud Hailer and Vox array to deliver his profane and terrifying messages to his enemies.[2] His personal flagship is the Battleship Herald of Damnation.[6] 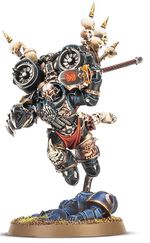