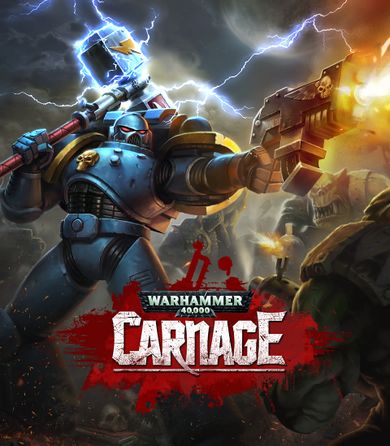 Warhammer 40,000: Carnage is a side-scrolling, Action-RPG mobile game developed and published by Roadhouse Interactive. It is based on Games Workshop’s iconic tabletop wargame, Warhammer 40,000. It was available on both the iOS App Store and the Android Google Play Store in June 2014. 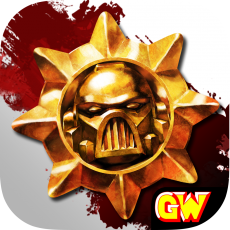 Carnage is currently a single-player, action, side-scrolling shooter where players take on the role of one of the available Space Marine Chapters. There is a heavy RPG element where players progress, level-up their Space Marines and collect Wargear to become more powerful as missions become more difficult. Players can move left and right, jump, and block, with two main attack buttons: shoot and melee. Players can also utilize Grenades and Rage attack when available. Each weapon has unique abilities, and attributes, where some even have their own special charge attacks for added damage. A core part of the game is finding the right combination of Wargear to take on each mission, as missions become more difficult with varying types of enemies and challenges.

The setting of Warhammer 40,000: Carnage takes place on the planet of Mithra, on the outskirts of the Imperium. The story behind Carnage is written by the award-winning Warhammer 40,000 novelist, Graham McNeill.

While the only playable character at the beginning of the game is the Ultramarine Chapter, additional Space Marine Chapters, such as the Space Wolves, Dark Angels, and Blood Angels, can be unlocked through various methods. New Chapters are added regularly through content updates. Each Space Marine has their own campaign and exclusive missions, which take place on the same campaign map. There are currently 3 campaign maps with over 60 missions available for each Chapter. The story of the game is revealed through the Codex as entries are unlocked by progressing through the campaign; each Chapter unlocks their own Codex entries as well.

There are over 600 items of Wargear to collect in Carnage. Melee Weapons include variants of Chainswords, Thunder Hammers, Power Fists, Lightning Claws, Power Mauls, Power Axes, Power Swords, and more. Ranged Weapons include many different types of Boltguns, Bolt Pistols, Storm Bolters, Plasma Guns, Plasma Pistols, and more, all with varied attributes and abilities. There are 3 visual tiers of Armour for each Space Marine Chapter for the Head, Chest, Greaves, with additional accessories such as Jump Packs, Purity Seals, and more.

The level and quality of Wargear is split into 5 tiers: Common, Superior, Rare, Epic, and Mastercraft, with Mastercraft Wargear being the most rare and valued.

The available slots to equip Wargear are Melee Weapon, Ranged Weapon, head, chest, greaves, and an accessory slot. A new slot was introduced during the Space Wolf Update for the new Support Drone feature.

Wargear is collected through Supply Caches.

In the second content update, Carnage introduced a new gameplay feature where players could equip a Support Drone to follow them into battle. There are over 100 variants of Drones to collect, from 4 classes: Melee, Ranged, Blocking, and Healing. Support Drones are equipped and collected, like Wargear, via Supply Caches.

There are 3 currencies that players can use to purchase Wargear.

Each Mission has a Fireteam mission available, which can be unlocked by completing it with a 3-Star rating. To complete a Fireteam mission, players must come together to reach the objective. In order to do so, players must be Facebook friends with each other, and each have completed the Mission with a 3-Star rating. Blood Ore is rewarded by completing the mission.

Star Rewards are random and are given at various intervals of Stars collected; players can see when they receive the next reward at the bottom-right of the campaign screen. Known Rewards include Supply Caches and Currency.

The Blood Angel Space Marine Chapter can only be unlocked by collecting 75 Stars.