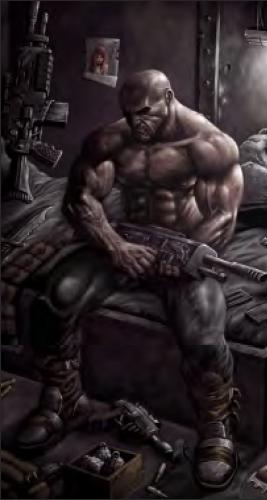 Harlon Nayl was a bounty hunter from the planet Loki in the Scarus sector, chiefly known for his adventures as one of the principal members of the Inqisitorial retinues of both Inquisitor Gregor Eisenhorn[1] and Inquisitor Gideon Ravenor[2]. Nayl served under Eisenhorn for many years, until the Inquisitor's disappearance in the aftermath of an investigation on the world of Ghül. He then found a new master in Eisenhorn's former pupil, Ravenor. Though believed to be pure muscle and no brain by many, Nayl proved to be an excellent and sharp-witted fighter. Amongst the several Inquisitorial cases he was involved in, Nayl's greatest actions probably took place in the thwarting of the plans of Zygmunt Molotch.

Not a great deal is known about Harlon Nayl's bounty-hunting career. He sometimes worked with a hunter named Duj Husman, whom he later recommended to Gregor Eisenhorn as a retainer. At some point, he gave up the life of a bounty-hunter and went to work as a member of the retinue of Inquisitor Eisenhorn.[1]

In the aftermath of the Thracian Atrocity, Nayl joined Eisenhorn in pursuing the rogue Inquisitor Lyko. He acted as a bodyguard and 'organiser' for Eisenhorn during this mission, particularly during the undertakings on Eechan. After this, Nayl spent several dispiriting months on Cadia alongside others of the retinue, searching for clues as to the whereabouts of a certain daemonhost. Surviving an encounter with both Cherubael and Prophaniti, Nayl later helped the other members of Eisenhorn's immediate retinue rescue him from Imperial custody, after the Inquisitor was arrested on suspicion of being a rogue. Nayl was later assigned to select and secure a meeting spot for Eisenhorn and his allies, and then took part in the assault upon the forces of the rogue Inquisitor Quixos.[1]

In 386.M41, Nayl was responsible for tracking down Fayde Thuring on the world of Durer. He was part of the combat team Eisenhorn took to deal with the heretic, and survived the incident with Cruor Vult. He was then sent to Messina, the location of the Distaff, to guard the critically injured Alizebeth Bequin. Shortly after arriving there, the agents of Pontius Glaw attacked, eliminating the Distaff. Nayl, along with Bequin and Kara Swole, were the only survivors. Investigating their attackers, Nayl and Swole were almost killed a second time, but were saved by the intervention of Inquisitor Ravenor and his agents. Joining up with them, Nayl and Swole were later reunited with Eisenhorn on the world of Promody, and were part of the combat team that attacked Glaw's forces on Ghül. However, Eisenhorn vanished at the conclusion of this action, leaving Nayl and Swole no real other option than officially joining the retinue of Inquisitor Ravenor. In time, Nayl would become just as useful an agent to Ravenor as he was to Eisenhorn.[1]

After the Ravenor thwarted Molotch's plans, Nayl parted ways with Ravenor and went freelance. In 450.M41 he faked his death to reunite with Eisenhorn on his hunt for the Yellow King.[6]

Nayl was a large man, with a heavy-looking skull and a shaved head; he appeared fairly brutish to most eyes, but was possessed of a graceful style of movement. Slightly coarse in personality, Nayl had a fondness for off-colour jokes, stimulants and women. Normally supremely confident in his martial abilities, he appeared to show particular deference and respect in that field to Cadian Kasrkin, regarding them as his superiors in skill (as well as a little bit scary). Nayl was intensely loyal to his masters, Eisenhorn in particular - during a period of Eisenhorn's career where the Inquisitor was labelled a rogue, Nayl willingly aided in breaking him out of Imperial custody and caused the deaths of Imperial enforcers in order to keep Eisenhorn free.[1]

Nayl accrued some great prestige in Eisenhorn's retinue, becoming one of his chief agents. He gained a great deal of autonomy, being allowed to roam freely across the galaxy in pursuit of Eisenhorn's goals. He was also seen as the senior 'muscle' in the retinue and Eisenhorn often delegated the selection of warrior-type agents to him when missions were being planned. A formidable Inquisitorial agent, Nayl was able to successfully complete undercover operations as well as those of a more overt nature. Comfortable in the dregs of Imperial society, Nayl was even been able to pass for a mutant during one undercover mission. His detective skills were generally adequate enough for man-hunting, and he was adept at identifying his targets despite their attempts to remain hidden. Nayl was also highly proficient at defensive security operations, but his interrogation techniques were rather basic.[1]

Skilled in the use of most conventional weapons, Nayl was both an excellent shot and proficient hand-to-hand combatant. He was known to favour swords and dueling daggers for melee weapons. For firearms, he appears to favour solid-shot ballistic weapons, usually carrying at least some kind of stub gun; although he has also been known to use forms of energy weapons. His personal weapons have been known to include a Tronsvasse parabellum pistol, a combat-cannon (a drum-fed heavy stubber variant), and a laser carbine, amongst others. Nayl typically wore some form of dull bodyglove and black combat armour, either flak or carapace-rated. He often carried other useful items of equipment, such as magnoculars and motion-trackers.[1]