No two items of Ork Technology are the same and weapons of this race are no exeption. Ork weapons don't only differ by their appearance, but are also often upgraded to enhance their effectiveness. Orks forever tinker with their weapons, strapping on extra bitz that occasionally improve the weapon’s performance. There are countless ways in which Orks can improve their favourite toys and the most common of them are listed here:[1b] 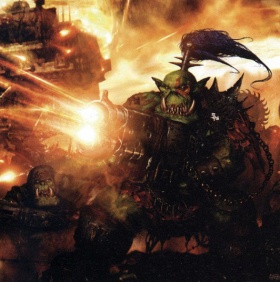 Ork with an upgraded Shoota[2]

Bigga barrel - Fitted on any ranged weapon, longer barrel and crude rifling give it additional range, about 10 metres.[1b]

Bigga klip - Room for additional ammunition can always be somehow added to any ranged weapon, often in the form of additional clips or dangling ammo belts, doubling the weapon’s ammo capacity.[1b]

Loudener - All weapons capable of suppressive fire can have its muzzle exaggerated to ludicrous proportions, amplifying its shots and making it much more effective in suppression.[1b]

Red light - Though this Kustom Bit is little more than a small red light bulb, Orks swear it improves a weapon’s accuracy. It functions as a Imperial Red-Dot Laser Sight and can be fitted on any Ork ranged weapon.[1b]

Sparky knobz - Any Ork melee weapon can be fitted with capacitors and a cluster of prongs that release massive electrical discharges on contact, effectively turning it into a shock weapon.[1]

Spikey bitz - Ork weapons are often covered in spikes, sharp protrusions, and additional blades. When fitted on a ranged weapon this upgrade functions as combat aссessory, making more effective when used in close combat. Melee weapons with this upgrade become even more deadly.[1b]

Kustom job - The weapon can be retooled to the user’s specifications or broken in by years of use, customising it beyond recognition.[1b]