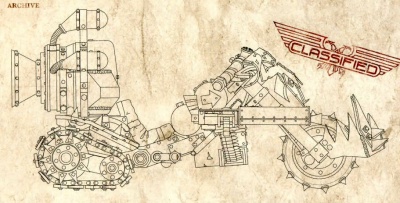 Warbikes are a class of Ork vehicles.

Warbikes are ramshackle devices created from as many parts as possible, designed and maintained by the Mekboyz to fulfill two important Orky urges: to move as fast as possible and to make as much noise while doing so. The bikes are more than a method of delivering Orks into combat, though - they also serve as weapon platforms for the so-called dakkaguns, a heavy weapon not normally mounted on unstable bikes for accuracy reasons. All warbikes are well-treated by their Ork owners, both due to their awesome power, and because of the sheer enjoyment Orks receive from their speed. In the Ork mind, the only activity exceeding the thrill of riding their mechanical steed at the enemy, side-mounted dakkaguns blasting away, is diving at the troops below in a Fighta-Bommer, dropping crude explosives the whole time.[Needs Citation]