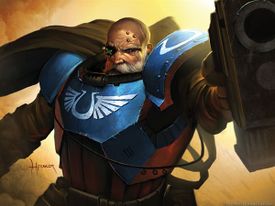 Eye of Vengeance is an original audio drama by Graham McNeill, detailing an episode on the planet Quintarn during the Invasion of Ultramar, chronicled in McNeill's novel The Chapter's Due. It was released on April 24, 2012, and re-published in print in Ultramarines: The Second Omnibus.

When the twisted Dark Mechanicus priests of the Bloodborn descend upon Quintarn, the Ultramarines are quick to move in defence of their prized agri-world. However, it soon becomes apparent that the planet’s fate will not be decided by the massed battle companies of the Space Marines, but by the actions of just one lowly sergeant – Torias Telion. A master marksman and Scout with a long history of service to the Chapter, Telion must now face the worst of the Bloodborn's technological terrors and secure the city of Idrisia from the enemy advance, if the Ultramarines are to have any hope of prevailing against an enemy whose numbers swell with every victory.

The war on Quintarn is not going well. While the rest of Ultramar has been invaded by the Bloodborn, Quintarn must defend against the Dark Mechanicus forces of Votheer Tark. Several of the planet's dome cities have already fallen to the enemy, and the defending forces have fallen back to the key city of Idrisia.

In a command bunker, the four commanders of the Ultramarines contingent on Quintarn – Captains Galenus and Epathus, of the 5th and 6th Companies, Sergeant Antaro Chronus, and Chaplain Ortan Cassius – assess the situation. Their immediate priority is defending Idrisia. Chronus says he can delay the Bloodborn's armour long enough for the rest to fortify the city, but their overriding problem remains: Tark's dark forges churn out new war machines at an alarming rate, using scavenged agricultural machinery or the wrecks of vehicles left on the battlefield; no matter what losses the Ultramarines inflict, their opponent's numbers grow with every battle.

Their council is interrupted by Scout Sergeant Telion, who has infiltrated the bunker past Galenus and Epathus's own bodyguards. Telion and his Scouts arrived on Quintarn well ahead of the main body, and have already been wreaking havoc behind the enemy lines. Galenus furiously demands that Telion and his scouts attach themselves to the main order of battle, but Telion ignores this.

While Telion and his scouts are re-supplying, Chaplain Cassius takes him aside and warns him not to push the Captain too far, but Cassius has convinced the other commanders to let the Scouts go out on their own.

Telion has taken the measure of their foe: Tark may style himself a warlord, but he "wouldn't know strategy if it came up and bit his metal arse." His only advantage is his ability to replace his losses with impunity, and convert the Ultramarines' losses to increase his own numbers. Take away that singular advantage, Telion reasons, and the war will be won swiftly. Therefore, their mission is to infiltrate and destroy the largest and most vital of Tark's dark forges, atop the Maidens of Nestor.

On their way north, Telion's scouts must lend what aid they can to Sgt. Chronus's delaying action at the Upashid Scar. Stealth and precision let them take out several crucial command vehicles, but the entire squad is forced to scatter when one of them unwittingly attracts the notice of a massive Stormlord tank. Fortunately, none of them are killed.

At the Maidens, the Scouts infiltrate Tark's massive central factory, the interior of which is guarded by Dark Mechanicus adepts and a corrupted Warhound Titan, piloted by the adepts' High Priest. With the rest of the squad providing overwatch, Telion slips down to the factory floor and begins planting melta bombs. Before he has planted his last two, he is discovered and attacked by the guards. Confronted by the massive Titan, his only option is to run underneath the range of its weapons and shimmy up its legs. He jams his last two melta charges into a nook beneath the Princeps' compartment, but the machine bucks him off before he can arm them. As the other charges begin to blow, he runs to rejoin his scouts, with the Titan bearing down on all of them. Brother Draco jumps down to the factory floor and makes a deadeye shot with his missile launcher that triggers the charges in its leg, and the Titan falls. Without their High Priest, the other adepts begin shrieking in confusion, and the factory's systems go haywire; between that chaos, and the devastation caused by the explosions, the factory begins to collapse. Telion shouts for Draco over the vox, but there is no answer, and Telion is forced to evacuate with the others.

Watching the forge collapse from outside, Telion and his squad mourn the loss of their Battle brother. Kaetan, the sergeant in nominal command of the squad, reminds him that Draco's sacrifice saved all their lives, and, by extension, the whole war. Telion refuses to be consoled, feeling it wrong that a young Scout, destined for a lifetime of heroic service, should be cut down, while a grizzled old veteran like him should survive. Kaetan tells him not to be foolish: "You are Torias Telion, the Eye of Vengeance, and you will live forever."

Eye of Vengeance is used to describe a special ability possessed by Telion's player during gameplay; when Telion scores a wounding hit, his player, rather than the enemy player, is allowed to determine the effect of the wound. (Codex: Space Marines (5th Edition): p. 88)