The Chapter's Due (Novel) 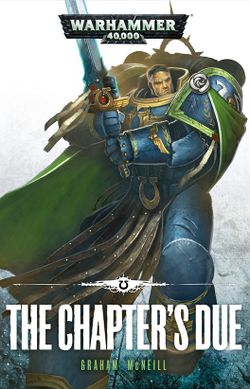 The Chapter's Due is the sixth novel in the Ultramarines novel series by Graham McNeill. It was first published in 2010.

Reinstated as Captain of the Ultramarines' Fourth Company, Uriel Ventris returns from Pavonis just as Ultramar faces its greatest threat in centuries: the invasion of a massive Chaos warband, led by the vengeful Iron Warrior Honsou, and a Daemon Prince sworn to wipe Guilliman's chapter from the galaxy.

Part 1: On the Pilgrim Trail of Roboute Guilliman

It's just another boring day on Tarentus... until the star fort Indomitable appears. Warsmith Honsou, seeking revenge on Uriel Ventris, has brought an entire army to destroy the nine worlds of Ultramar. For this he has freed the Daemon Prince M'kar from its imprisonment inside the Indomitable's warp core, who summons an army of daemons to overrun the planet.

On Macragge, Marneus Calgar convenes a council of war in the Fortress of Hera, including each Company Captain, Inquisitor Namira Suzaku of the Ordo Malleus, Magos Vianco Locard, and Shadow Captain Aethon Shaan of the Raven Guard.

To the consternation of many of the Captains, Lord Calgar confesses that M'kar was not destroyed decades ago in the battle aboard the Indomitable, as they had been led to believe; likewise, when Magos Locard describes the destruction of Tarsis Ultra, Uriel Ventris realizes that Honsou leads the invaders.

Uriel's Fourth Company is dispatched to Tarentus. With the help of Captain Shaan's squad, the Ultramarines' scouts infiltrate the capital city and shut down the defenses, but the whole planet is a trap. As soon as the Fourth touches down, they are attacked by hordes of Khorne Berzerkers. Only a premonition by Uriel makes him call for retreat, moments before Admiral Tiberius aboard the Vae Victus warns that orbital torpedoes have been launched at the city. They narrowly escape the destruction of the city, and Captain Shaan remarks that Honsou must truly hate Uriel.

Back on Macragge, Uriel and the Fourth are grieved to hear that Talassar has been overrun in the same manner as Tarentus. Based on divination performed by Chief Librarian Tigurius, the Ultramarines divide their forces to counter the elements of the Bloodborn, which has been divided to attack several worlds at once. Several Captains are baffled by Tigurius's pronouncement that Calth will prove crucial to the whole conflict, yet the majority of the Ultramarines' strength will be deployed elsewhere.

Aboard the Battle Barge Caesar, Lord Calgar and the First Company under Captain Agemman confront the Bloodborn fleet over Talassar, but are lured into a trap that disables the Caesar and sends it crashing into the oceans below.

On Espandor, Cato Sicarius leads the Second Company in a series of hit-and-run attacks on the Bloodborn army, but, determined to regain the initiative, deploys his best squads on a scouting mission to find the force's leader, the Corsair Queen Kaarja Salombar.

Honsou personally leads the Bloodborn force attacking Calth. With the help of The Newborn, a twisted clone of Uriel, the Iron Warriors' fleet is able to bypass the planet's orbital defense grid and drop directly onto the planet. Luckily, Uriel has already sent the Imperial forces on their march to Calth's underground caverns.

Seeing pict footage of the Bloodborn overwhelming the surface defenses, Uriel recognizes Ardaric Vaanes, the renegade Raven Guard warrior, among Honsou's forces, and is horrified to recognize his own likeness in The Newborn. Magos Locard theorizes that the Iron Warrior is a genetic "copy" of Uriel, and persuades him to be mind-scanned to discover something of the clone's history.

At first, Honsou's men believe that they are trapped on the surface by the impregnability of Guilliman's Gate, but Vaanes and the Newborn manage to infiltrate and unlock it. As the gate is opening, Uriel rushes to the control center with his Command Squad, where Vaanes is captured, but Uriel takes a bolt round in the head from the Newborn.

On Talassar, Calgar, Tigurius, and Agemman lead the First Company on a forced march, harassed by constant waves of daemons, to the ancient fortress of Castra Tanagra, where they dig in for a long siege. The Ultramarines' fighting skills and Tigurius's psychic powers are more than enough to hold the daemons at bay, but Tigurius warns that they are just the chaff; M'kar is simply waiting for them to be worn down by fatigue and attrition.

When Uriel regains consciousness, he is grateful to be alive, though one of his eyes had to be replaced by an augmetic implant. The Fourth Company is heading to Four Valleys Gorge to await the Bloodborn assault. What follows is a desperate battle, as daemonic fire destroys the Ultramarines' carefully-laid defenses and hordes of Chaos warriors swarm into the caverns. In the midst of this battle, Honsou and a small handpicked force burrow behind the Ultramarines' lines in a driller vehicle.

Part 3: The Chapter's Due

On Espandor, Sergeant Vorolanus and his Tactical Squad, the "Thunderbolts" infiltrate the city of Corinth, disguised as Claws of Lorek. They launch a surprise attack, which causes Salombar to reveal herself, and Vorolanus signals the rest of the company. Before the Thunderbolts are slaughtered, Sicarius and the Second arrive. The Ultramarines Captain personally duels the Corsair Queen, finally decapitating her with help from Vorolanus.

On Calth, Ardaric Vaanes, under interrogation, agrees to lead Uriel to Honsou, who has gone to the lost tomb of Remus Ventanus, on M'kar's orders. Uriel and a small group of men follow the Iron Warrios there, but find themselves badly outnumbered. After Uriel and Pasanius kill the Newborn in melee combat, the Iron Warriors open fire, and many Ultramarines die, but are are suddenly saved by what appear to be the Legion of the Damned and the ghost of Remus Ventanus. Refusing to admit defeat, Honsou triggers demolition charges, collapsing the cavern on them.

Uriel, Pasanius, Shaan, and several of their men survive, as does Inquisitor Suzaku. Honsou has disappeared, and there is no sign of his body. Uriel picks up a small flint knife that the Newborn had taken from the tomb, and orders the Fourth Company to make all speed to Talassar.

Aboard the Indomitable, M'kar has been watching the battle on the planet below, waiting for the Ultramarines' lowest ebb. This finally comes when Tigurius, impossibly weary, falls into a coma and the psychic barrier surrounding the fortress collapses. M'kar appears on the planet in person at the head of an army of daemons, prepared to slaughter the Ultramarines to the last man.

The fortress is overrun, and Agemman is gravely wounded, before the combat turns into a one-on-one fight between M'kar and Calgar. Even the Chapter Master is no match for the daemon's strength, but Calgar is saved by a sudden blast of power from a reawakened Tigurius. The Librarian tells Calgar that he has temporarily severed the daemon's connection to the warp core of the Indomitable, but the daemon's vulnerability will not last long. Calgar marshals the survivors of the First Company and leads them out of the fortress in a final charge for the safety of Ultramar.

M'kar seizes Calgar in its grip, but is halted by the sight of the rising sun, and the appearance of two ships in the sky: the Vae Victus of the Fourth Company and the Valin's Revenge of the Second. Uriel and Sicarius lead their companies in a devastating attack on the daemon army's flank, and Uriel jumps to the Chapter Master's side, naming M'kar by his true name, Maloq Kartho, formerly a Dark Apostle of the Word Bearers. M'kar is weakened, as Uriel throws the flint dagger - recognized by M'kar as the "Shard of Erebus" - to Calgar, who stabs the daemon in the throat with it, destroying it forever. With their leaders destroyed or disappeared, the Bloodborn fade away, and are purged from Ultramar in the following months.

The invasion has cost the chapter dear, and the Ultramarines and their allies hold a solemn ceremony in the Temple of Correction on Macragge, where Calgar chisels the names of three hundred and forty-seven lost brothers into the rolls of the dead.