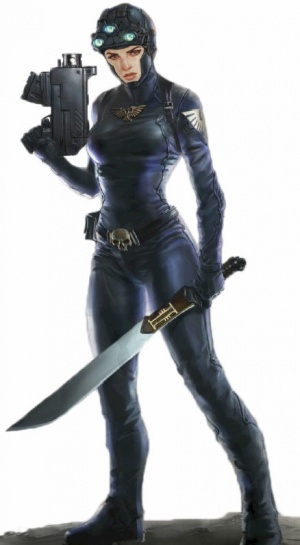 An Initiate of the Ordo Sicarius

The Ordo Sicarius is a relatively recent department of the Inquisition, created to monitor the Officio Assassinorum.[2]

Following the Age of Apostasy, led by Goge Vandire, came the Wars of Vindication within the Office of Assassins itself. The Officio had become riddled with corruption and the Grand Master of Assassins brought it to its knees in order to purge it. The Officio was reduced to ruins and needed a full reorganization. Following a thorough investigation, Inquisitor Jaeger deemed that a special order of the Inquisition was needed to monitor and control the Officio much more closely. His proposal was accepted and the Ordo Sicarius was created, to monitor the Office for signs of corruption and to expose and to punish the responsible parties.

At the Inquisition's request, the Officio Assassinorum also agreed to the following changes:

A major problem was that the Officio Assassinorum was, and obviously still is, a highly secretive organisation. To monitor it effectively one is forced to work from within its confines, and not from the outside. Therefore, inside the various temples are some agents of the Inquisition, Assassin-Inquisitors, which provide the needed information for the Ordo Sicarius.

The Ordo Sicarius has, to date, successfully uncovered and prevented two assassination attempts on the High Lords of Terra themselves and also prevented the assassination of an Inquisitor who had been working closely with Orks in the Lamina sector.

Sicarius (plural, Sicarii) was a Latin term coined by the Romans to describe an extremist faction of the rebels during the First Jewish Roman War, who specialised in stealth tactics and assassination, often carried out with distinctive, curved daggers called sica.