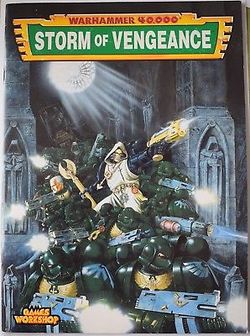 Storm of Vengeance is a campaign pack that lets players recreate the events of the battle on Piscina IV.

The first version was released during 2nd Edition, and chronicles the invasion of the Piscina system by the combined forces of Ghazghkull Mag Uruk Thraka and the Bad Moons warlord Nazdreg Ug Urdgrub. The Dark Angels' 3rd Battle Company, led by Master Belial at the time, was sent to eradicate the greenskin menace.

The campaign pack includes a series of scenarios based on the major events of the campaign, and lists the names of various Dark Angels Interrogator-Chaplains, Apothecaries, Techmarines, Librarians, and various Squads. The special characters detailed included Veteran Sergeant Naaman.

"Storm of Vengeance" was also updated for use in 4th Edition, and was available as a free download on the Games Workshop website here: http://uk.games-workshop.com/spacemarines/darkangels-stormofvengeance/1. As of July 20, 2019, neither the link nor the archive page are working anymore.

The free 4th Edition update is accessible at scribd https://www.scribd.com/doc/210503857/Complete-Storm-of-Vengeance-Campaign-Pack