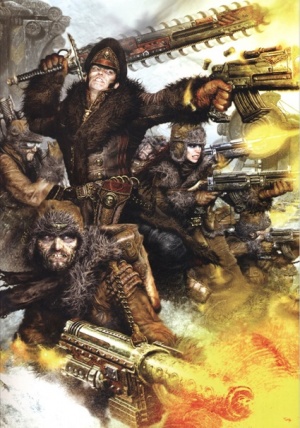 The 597th Regiment of the Valhallan Ice Warriors was formed in 931.M41, and is celebrated as being the home unit for many years of Commissar Ciaphas Cain.[1b]

The 597th began as the amalgamation of the survivors of two distinct regiments, the 301st and the 296th regiments, both of which had suffered over fifty percent losses after fighting against Tyranids on Corania.[1a]

Although it was standard practice for the Departmento Munitorum to group surviving elements into a new regiment before sending them reinforcements, the initial differences between the 301st and 296th were almost guaranteed to cause friction, so much that the combination was speculated to have been a clerical error, or simply bureaucratic stupidity.[1a]

The 301st were specialised planetary assault shock troops, while the 296th were rear echelon, HQ security units and one of Valhalla's few all-female regiments. To make matters worse, Regina Kasteen, the 296th's senior surviving officer, was promoted to the new unit's colonelcy by virtue of a mere three days' seniority over her opposite number in the 301st, Ruput Broklaw, who became her executive officer.[1a]

Combined with a lost sense of identity, the unification of the regiment did not go smoothly until the arrival of Commissar Cain, which coincided with a riot breaking out in the mess hall that left several troopers and naval provosts dead.[1a]

Cain's approach was to force the men and women of the two former units to integrate. On his order, the men and women were formed into mixed squads and fire teams, forcing them to train together and depend on each other. He instituted generous incentives for the new teams that performed best during exercises, which remained a proud tradition of the regiment for years afterwards (for instance, the extra ale ration for the most disciplined squad came to be known as "Cain's Round").[1b]

With the agreement of the Departmento Munitorum, Cain proposed that the new regiment's designation be the 597th (301 + 296), allowing the troopers to feel that their old regimental traditions and identities were not being erased, merely redefined. This compromise was accepted by most.[1b]

The fragile morale of the new regiment was also boosted when Cain interceded with the captain of the troop ship on behalf of the five troopers found guilty of committing murder during the riot. Instead of execution, Cain ordered that they be held until they could be transferred to a Penal Legion, or, failing that, a particularly dangerous mission.[1b]

Cain's efforts succeeded in creating an effective fighting force of the 597th before its maiden deployment to Gravalax. By the time of its later deployments, to Simia Orichalcae and Adumbria, the regiment had integrated so successfully that Cain often had to deal with the opposite kind of disciplinary problems - the kind arising from lovers' quarrels, jealousy, and the occasional pregnancy.[2b]

The Valhallan 597th was noted to have a fairly typical organisation for a Valhallan regiment. When the regiment was founded, it consisted of over a thousand troopers.[1c]

At its broadest level, The regiment was made up of five companies. With the exception of the Third Company (which was the regiment's designated logistical support company), each was comprised of 4-5 platoons made up of five 10-man squads plus a command element. Depending on the nature of the battles the regiment was expected to fight, the squads were sometimes split into fire-teams, each containing five guardsmen.[1c]

The regiment's vehicular assets included nine Sentinel walkers, enough Chimeras to transport the entire regiment and Salamanders (both the Scout and Command variants), but did not include any Leman Russes or other heavier armour.[1d]

Also included is a detachment of noncombatant Adeptus Mechanicus Enginseers to handle maintenance. Adding the crews of the vehicles, the entire regiment may reach approximately 2,000 men at full strength.