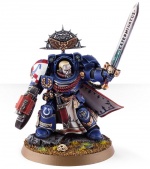 Severus Agemman is the Captain of the Ultramarines 1st Company and Regent of Ultramar.[1]

Previously the Captain of the 2nd Company, Agemman was promoted to 1st Captain after his predecessor, Captain Saul Invictus, was killed during the Battle for Macragge.[2a] While Captain Agemman is nominally the successor to Marneus Augustus Calgar as Chapter Master, Cato Sicarius, his successor as Captain of the 2nd Company, is considered the more likely heir, a possibility that others speculate must displease Agemman.[2a][3a][3b]

In the aftermath of the Bloodborn's failed Invasion of Ultramar, Chief Librarian Tigurius met with Calgar to discus concerns he had about Agemman's role as First Captain. Tigurius claimed that Agemman had not fully recovered from being struck down by the Daemon Prince M'kar during the invasion, and was no longer the warrior he once was. He went on to state that if the Ultramarines were to face any future threats to the Imperium, they would need a new Captain who was fully capable of leading the Chapter's First Company into battle. Calgar took what Tigurius said into consideration, but has made no final decision on Agemman's fate.[9]

During the Ultramar Campaign Agemann again took up arms to repel against a Chaos invasion, this time fighting alongside his reborn Primarch Roboute Guilliman. After the battle Agemman stayed alongside Marneus Calgar and Tigurius to oversee Ultramar as Guilliman embarked on the Terran Crusade[10] and would defend Ultramar during the subsequent Plague Wars. The forces of Nurgle kept the Ultramarines hard pressed for years, until the successful conclusion of Guilliman's Indomitus Crusade. Afterwards, Guilliman led a sizable strike force to aid Ultrmar and when he arrived he conducted a strategic meeting on how to deal with Nurgle's forces.

During the meeting Guilliman also discussed the future of the Realm of Ultramar and stated he had made a mistake by decreasing Ultramar's size in the aftermath of the Horus Heresy. He was going to fix that mistake, by making Ultramar even larger than it once was and in order to ensure this would take place, Guilliman reinstated the rank of Tetrarch. Agemman was the first to be chosen and the First Captain readily agreed to his new position. He was given command of Konor and was charged with increasing Ultramar's northern territories; which included the Scourge Stars, which Guilliman ordered Agemman to reclaim from the forces of Nurgle.[11]

The two models pictured here have been used by Games Workshop to represent First Captain Agemman. The first model is a Space Marine Terminator Captain featured exclusively as part of the limited-edition "Space Marine Strike Force Ultra" box set.[4] This model is referred to as Captain Agemman in White Dwarf.[5] The second model is listed on the Games Workshop website as "Space Marine Captain in Terminator Armour," and is also part of the "1st Company Veterans"[6] and "Complete Ultramarines Chapter"[7] box sets, both of which place the model as the Captain of the Ultramarines' 1st Company.[Needs Citation]

During the Invasion of Ultramar in 854999.M41, Marneus Calgar travels to Talassar to confront the Daemon Prince M'kar.