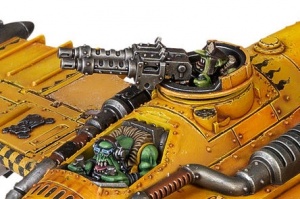 Flyboyz are an Ork group that are a sub-cult of the Speed Freeks and have been determined to be an unstable part of a tribe that holds a desire to fly.[1]

Their desire for flight marks them as different from most Orks, who prefer to have their feet firmly on the ground. Members of the Flyboyz are not satisfied with the high speed of ground-based vehicles and thus take to the air as part of their quest for greater acts of exhilaration. They are often seen in states of manic euphoria as a result of their search for greater speeds as well as their reckless attacks and dive bombing, which seemingly have an effect on their brain pattern. This has resulted in many Orks seeing Flyboyz as mad, leading to them living in a state of semi-exile from the tribes' hierarchy, which means they mostly associate with other Flyboyz. The only other contact they have are with Gretchin slaves and the technicians that maintain their aircraft.[1]

As is typical among Speed Freeks, Flyboyz hail predominately from the Evil Sunz Clan.[2]