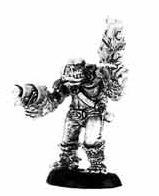 Yoofs are young and inexperienced Orks. Having hatched from fungal cocoons in the wilderness, because Orks inherit many of their abilities rather than develop them, Yoofs are not very different in appearance or ability to Ork Boyz. However due to their eagerness, they are cheaper to hire than Boyz, but less capable in a fight. Yoofs are commonly a lighter shade of green then more mature Orks, as their skin will inevitably grow darker as they get older.[1]