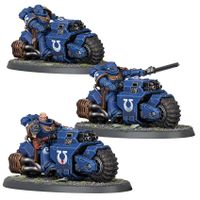 Outriders are most commonly used to advance ahead of the main lines and to guard the flanks of larger formations. In battle, they perform lightning fast hit-and-run attacks on enemy strongholds, and are employed to chase down any who would seek to escape.[3] Their Raider Pattern[3] bikes are equipped with frontal Bolters while they themselves wield Chainswords and Bolt Pistols.[2] The performance of the bike is effective as long as the rider can dominate its bellicose Machine Spirit.[3]