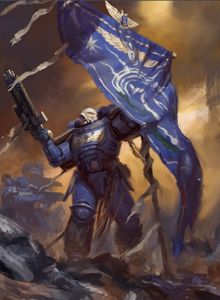 Company Ancients, also known as Company Standard Bearers, are Space Marines who has shown honour and combat prowess sufficient to be granted the right to carry the Company Banner into battle. They often form part of a Command Squad and fight alongside the company's Captain.

One of the most common specialists found fighting alongside Veteran Squads, Company Ancients have the privilege of wielding the Company Standard into battle. Each such standard is an ancient relic, steeped in history and deeply revered by the warriors of the Company. Many have been carried over battlefields for hundreds and even thousands of years. Every Space Marine of a Company, from the most seasoned veteran to newest recruit, fights harder in the presence of a Company Ancient and his standard. Thus it is the duty of the Company Ancient to never let his banner drop while he still draws breath. Losing his banner while still living is seen as the most terrible and shameful dishonor. To this end, these individuals are invariably great warriors.[1]

Bladeguard Ancients are Standard Bearers assigned to Bladeguard Veteran squads which carry their Chapters most precious standards into battle. The most revered of these incorporate the remains of fallen heroes of the Chapter.[9]

Chapter Variations of the Company Ancient include the Brotherhood Ancient, a title used by the Grey Knights.[2]

Besides the company banners, each Space Marine Chapter has a single chapter banner, borne by a member of the Honour Guard.